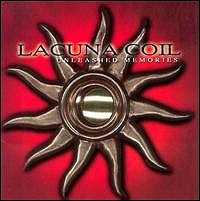 Italian outfit Lacuna Coil broke into the music scene in 1998 with a self-titled EP that mirrored to some degree bands such as The Gathering and Switchblade Symphony. The music consisted of a blend of more lighthearted gothic metal and facets of power metal. With Unleashed Memories, the band comes into its own, producing a catchy, almost pop style of music that is far removed from any overtly metallic sound but nevertheless remains rooted in power metal.

The strongest facet of Lacuna Coil is vocalist Christina Scabbia, whose pleasant voice combines the soprano style of vocalists such as Liv Kristine Espenaes (Theatre Of Tragedy) and Tarja Turunen (Nightwish) with more aggressive croons by the likes of Doro Pesch and Lana Lane. Complementing her vocals is Andrea Ferro, whose singing style is more abrasive and harsh.

Drummer Cristiano Mozzati gives the band its power and heartbeat, his percussion ranging from straightforward (Purify) to highly stylised (Cold Heritage, which absolutely rocks). Marco Coti Zelati’s woofer is but a subtle presence, but the guitar work courtesy of Cristiano Migliore and Marco Biazzi is up front, the riffs and hooks catchy and aggressive. An example of an aggressive song would be 1:19, in which the lead guitars churn out some hard-edged riffs and Ferro hisses out his snarl-laden croons.

Lacuna Coil’s emphasis is on melody and beauty, with the guitars and the vocals working off each other while the percussion punctuates key bridges and choruses. Lyrics remain influenced by gothic metal and tackle topics such as paranoia, the strangeness of death, and alienation.

Unleashed Memories comes with ten original tracks, plus the EP Halflife, which consists of five tracks. Standouts among the five include the catchy Stars and an alternate version of Senzafine (a track sung in Italian). If you like gothic/ power metal that is decidedly upbeat and melodic, you cannot go wrong with Lacuna Coil.