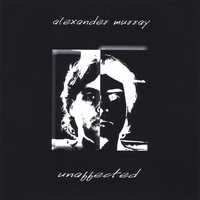 There are times when you stumble across something that makes you take stock of the world around you. Armed only with an acoustic guitar and voice that is as powerful as it is pure, Alexander Murray’s self-financed debut album, Unaffected is one of those somethings…

The strength of this Glaswegian solo artist’s music is the simplicity of it all. The lyrics convey an intelligence and worldly view on matters that on closer inspection is also the work of a man fighting an internal battle between hope and despair. The opening track City Streets is a case in point; a song about what was, what is and what should never be.

The album takes the listener through the emotional wringer, from love to loss in River So Wide to the redemption cry that is Promise. Alexander Murray clearly needs to bare his soul in public, and to do so with the stripped down arrangements of Unaffected is to be lauded as there is no distortion or rocking guitar riffs to hide behind.

Arguably the two standout tracks on the album lie back-to-back with the respectively beautiful and thought-provoking tracks, Never Gonna Fly and Life, both of which bring the bared down work of Mike Peters to mind. Very much in the vein of of fellow Scots Roddy Frame and Justin Currie, Murray’s social commentary is as damning as it is enlightening; and like those contemporaries, his acoustic guitar work sets the scene from which to share his insights and thoughts.

There no big chorus lines, there are no string arrangements. There is only a big voice and no small amount of talent. This is an album worth buying and a discovery worth bragging to your friends about, but hurry before they beat you to it.