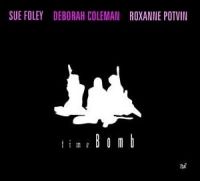 On the cover, they’re silhouetted like three guitar-totin’ Charlie’s Angels. Inside, they form a Blues Caravan of performers, each with their own solo back-catalogues, playing together live in the studio. You’d imagine that the category ‘blues woman’ is not exactly over-subscribed. Yet Ottawa-raised Sue Foley already has some ten albums to her credit, US-born Deborah has scored a half-dozen, while relative newcomer Roxanne (from Quebec) has only two, although her second – The Way It Feels, brags star-support from the likes of Bruce Cockburn, John Hiatt and Daniel Lanois.

Locked together, their ticking-ticking-timebomb title-track ignites the album with a snazzy nicely raw instrumental jam. Next, Roxanne oozes Hitting On Nothing, sensuously pouring what they used to call raunch over punching drums and shimmering guitar. The theme up-fronts a hard materialistic take on sexual politics. Here, there “ain’t nothin’ goin’ on but the rent,” and he’s no-way getting action ‘cos she “ain’t seen hide nor hair of a diamond yet.” Then Don’t Start The Car wraps a righteous riff around juicy innuendo about using “the right tool for the job.” It’s a teasing sexual rough-ride spiked with more double entendres than a Carry On movie, opening “I’m a level-headed woman” before adding “..most of the time,” then delivering a warning shot at the male gender in general against the perils of coitus interruptus. Deborah signposts their lineage direction in the liner-notes by thanking her ‘home woman’, Atlantic’s wonderful Ruth Brown, adding Show Me as an artfully replicated Race Records 78-RPM – think Memphis Minnie or Koko Taylor, by way of Bob Dylan. But surely blues is more than just studiously applying yourself to the correct approved role models?

Elsewhere, Talking Loud runs funk-lines over a distant relation of the Isley Brothers’ It’s Your Thing. And So Far is a boogie road-movie with country whoop. While standout track Strong Enough To Hold You would sound great with the Memphis Horns behind it, but settles for a fine slow-burning Steve Cropper-style guitar figure. So, they get close, but in truth none of the three provide the lived-in killer vocals the songs really need. And without it they’re essentially blues-lite. The Dixie Chicks of blues, this trio are less born under a bad sign than three rather fragrant ones.