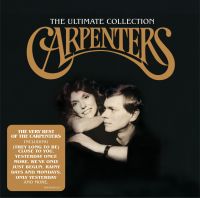 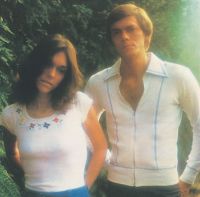 Well known to be an unlucky band, one of the Carpenters’ bad breaks was to become successful in the 1970s. If they had broke during the previous decade, they would have been hailed as eccentric wonders. However, being synonymous with the 1970s has dealt them a credibility blow that they may never get over. Even now, in an era when bands such as Sonic Youth and Shonen Knife have covered them on a tribute album, they are still looked upon with wariness.

And – my god – they were ubiquitous. It is remarkable how many of these tracks are hardwired into the brain of anyone who was around in the early part of 1970s. Richard and Karen Carpenter tried to make it in the 1960s, but it just didn’t happen for them. The first song on this compilation is their first noteworthy single, which came out at the very end of that decade. There is therefore a logical reason for starting this double collection with it, but it does have a ‘can you guess what it is yet?’ quality about the intro, which doesn’t help with the kitsch aspect. Then Karen’s crystalline vocals reveal it to be Ticket To Ride.

It’s followed by the more familiar Close To You, in which Karen sings of being in love with someone who is followed around by “all the girls in Tinseltown.” Perfect orchestration by Richard and all the love clichés that you can think of are flung into this guileless song without a hint of irony. Contrast it with Superstar, which sounds like the bitter aftermath of the same relationship. The girl has been loved and abandoned by a touring musician and her heart is torn apart every time she hears his guitar on the radio. Richard has deliberately thrown virtually every instrument available apart from the guitar into the complex blend to give her viewpoint. Karen sounds as if she is about to break into tears during the chorus. She reveals much more humanity during the melancholic numbers such as Hurting Each Other which is sheer pop brilliance but during a song such as Sing, for example, which is supposed to be an ode to joy, she sounds unintentionally cold and ironic. Weirdly, it is left to the woodwind to supply the warmth in that one.

Richard Carpenter compiled this selection and during the group’s lifetime he was also responsible for the sound of the band. Karen, as far as recording went, could merely be regarded as another one of his instruments. On I Want, for example, the production is so clear that you can hear the saliva moving in her mouth. On later songs like I Need To Be In Love, Richard would double-track her vocals and add some phasing. Possibly he was attempting to deal with the emotional limitations that hampered some of the tracks. There were certainly some bizarrely unsuitable cover choices. Hank Williams’ Jambalaya (On The Bayou), for example, and Please Mr Postman, both sound far too clean.

At times there is an attempt to break away from their usual sound. When an overdriven guitar kicks in, as it does occasionally on tracks such as Goodbye To Love and Only Yesterday, it comes as a powerful surprise. They’re not rock, but it’s not a genre that is totally alien to them. Then there is the mock-western Desperado, complete with harp. They weren’t adverse to country music either as the playful Sweet Sweet Smile shows.

The best tracks, however, are the ones that play to their strengths. The stunning easy-jazz of This Masquerade is perfect, no matter what angle you approach music from, and Those Good Old Dreamsand the poignant Yesterday Once More rank highly as well. And, of course, there’s always Klaatu’s Calling Occupants Of Interplanetary Craft that in the hands of the Carpenters becomes seven minutes of the craziest stuff ever put on vinyl. It’s a miniature rock opera and it even manages to be frightening before a splash of humour de-fangs it. Absolutely barking and worth the price of admission alone.

There are 35 tracks on the CD but if you go for the download version of the album, you get an additional seven tracks, mostly taken from later, solo albums.