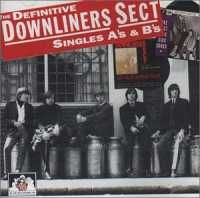 Abandon taste all ye who enter here. It was the EP The Sect Sing Sick Songs that vomited the Dowliners into distinction above and beyond the other rough-hewn amped-up long hair, acne, and maracas R 'n' B bands playing the mid-1960s' club circuit. Musically, the Sect locate at the Yardbirds and Pretty Things nexus. But lyrically their macabre fascination with the sicko aspects of high-speed death, autowreck mutilation, and implied necrophilia also make them direct precedents to the likes of The Cramps and The Damned. Re-issued in 1978 by Charley their prurient EP enjoyed a further spine-tingle of notoriety. Leading off with Leader Of The Sect - a parody of the Shangri-Las, it focuses on their cover of the American Jimmy Cross death-disc I Want My Baby Back. For the car crash was especially favoured by this audio-nasty genre, with mangled teen race-memories of James Dean and Eddie Cochran lurking behind the morbid attraction of its twisted tales.

Beautiful corpses all. Here, regaining consciousness post-impact, Sect vocalist Keith Grant looks around and "there was the Leader, / there was the Pack, / and over there was my Baybee, / and over there was my Baybee, and way over there was my baybee!" As the rock Sects in, drowning in remorse and tortured by loss, our narrator disinters his Baybee's fragmented body so he can climb into the coffin with her for one last embrace. All four sick tracks are re-animated intact on this grave-robbing 29-track compilation, fleshed out with the Dowliners uneven Pye and Columbia label singles and demos that uniformly failed to chart between June 1964 (Baby What's Wrong) and March 1967 (I Can't Get Away From You).

Their career spanned three albums and two EPs, raw and raucous in a skeletal 'Backbeat' sort of a way. Formed around Irish-born Don Craine, a man with a penchant for Deerstalker hats, the Sect appeal began from a base of R 'n' B standards - Roll Over Beethoven, Beautiful Delilah, and even Green Onions, covers that their originals tend to mimic. Sect Appeal re-writes Bo Diddley, while Baby What's Wrong doesn't sound too dissimilar to Jimmy Reed's  Big Boss Man. And despite flirtations with country 'n' gore, they never really got much further. But for Sect maniacs and devotees of curios and oddities this album has more than a few classic crypt-kicking moments.

Uncategorized
Call Us:- 0123456789
Email Us:- info@soundchecksmusicreview.co.uk