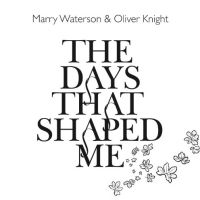 THE DAYS THAT SHAPED ME
Marry Waterson and Oliver Knight

Own up, Michael Douglas never made a movie a damn as good as father Kirk. When it comes to artistic dynasties, you gotta be wary. To the folk-roots community there's ready-made expectations aplenty tied into the Waterson family legacy, both a promise and a hindrance for the brother and sister duo of Maria 'Marry' and Oliver 'Olly'. But the tactile squeak of fingers on fret nudges a promising play-in introduction. The most poignantly touching song, Angel's Sing, remembers mother Lal whose "lines entwine with mine as we sing to a different tune."

For Water-daughter Marry, from time to time, "she's in my rhyme." These 14 new pristine tracks come without a single unessential embellishment, every note precisely where it should be. Not that there are not guests. The little-girl guest-vocals of Kathryn Williams, who also co-wrote Father Us, provides a perhaps deceptive opener, Marry's voice is starker, more world-roughened, more stately, more - maybe, what you'd expect: a voice that adds eeriness and edge.

On Curse The Day she rails against PMT, both a chemical lottery and a puzzle solved. While Oliver adds biting electric guitar to Sleeping Flame, perfecting the sound-alchemy at his own Panda studios. The charming If You Dare illuminates a girl in polka-dot leggings and green velvet beret, and when you consider an image as luminous as "the sun through the leaves brought out the henna in her hair" - boom boom boom it's even brighter than the Moon Moon Moon!

Cousin Eliza Carthy sings on The Loosened Arrow and plays dextrous fiddle here and there, Reuben Taylor adds keyboard to Run To Catch A Kiss, while James Yorkston both co-wrote and sings fleet-footed harmony on Yolk Yellow Legged. But it's never less than Marry and Oliver's album. A tradition, in their words, both re-voiced and replayed. They came, they soar, they conquer...