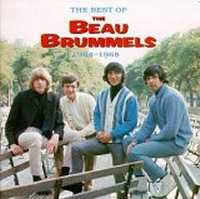 THE BEST OF THE BEAU BRUMMELS
Beau Brummels

Any list of notable Bo's of our time must include the incomparable Bo Diddley, and Bo Derek, maybe even Bo Selecta. Then there's Beau Bridges... and - okay, the Beau Brummels too. But listen... in the mid-1960s as brit-pop's first tidal wave was decimating the US west coast, a radio DJ by the name of Tom 'Big Daddy' Donahue was on hand promotion-wise when The Beatles and The Rolling Stones played Frisco's 'Cow Palace'. Around the same time a hooker friend took him to San Mateo's 'Morocco Room' Club, where the Brummies just happened to be on-stage. For Tom, the connection is obvious, and probably inevitable. Here is a combo of pudding-bowl mop-tops who look like five Brian Jones, five Keith (Yardbirds) Relfs... or five Liam Gallaghers. They also sport a neat line in 12-string guitar lead set to plaintive minor-key harmonies reminiscent of The Searchers (and later The Byrds, or the Stone Roses), all grounded in a hard beat-boom rhythmic urgency. Hey, their group-name means they'd even get to sit alongside The Beatles in alphabetised record-store racks! An eagerly salivating Donahue promptly hauls the Beaus into the radio station studios after broadcasting hours, grafts in a young black producer called Sylvester (alias Sly Stone) Stewart, and shoves the resulting vinyl out on his own Autumn Records indie label. Two national top 20 hits follow, firing the opening shots in America's retaliation to the 'English invasion', with a sound full of weird intimations of the Californian psychedelic strangeness to come. To establish their vaguely cross-Atlantic credentials the Brums are named after a sharp-dressed English dandy, while second vocalist Declan Mulligan actually comes from County Tipperary - but he quits early on and later sues when the hits come.

Meanwhile, guitarist Ron Elliot writes engagingly simple-minded harmonica-edged folk-rock songs with titles like Sad Little Girl. Sal Valentino sings powerful lead on their first hit Laugh Laugh (a US #15 in December 1964, later collected onto Lenny Kaye's 'Nuggets' boxset). Opening with melancholy keening harmonica the lyrics mock the proud girl "who thought she was too good," but is brought down to earth because "you don't learn everything there is to know at school," the rattling tambourine-driven mood-switching moves from driving chorus into a more sympathetic "lonely - oh so lonely" mid-point harmonies section, finally offering "take my advice, don't be so smug" or she'll wind up sitting on the shelf. Not - perhaps, an era-defining record, but certainly one with its antennae finely-attuned to the way the times are a-changin'. As is the looser, less-structured Just A Little which peaks even higher (#8)... then their next, and last two charting singles, You Tell Me Why, and a cover of The Lovin' Spoonful's jaunty Good Time Music.

Crawdaddy magazine goes so far as to proclaim Sal "the best voice in rock." The best bits of their collective story are here, from the soft focus Don't Talk To Strangers to the heartbreak 'magic spell' of the Sad Little Girl "walking by the sea/ stares at the limb of the driftwood tree/ washed by the waves to a sandy shore.../ she won't be happy any more" with its lonesome harmonica and rhythmic pulse behind its folksy harmonies. But it's mostly open, energetic stuff that sometimes reminds you of an early naïve Love, or at other times a stripped-down blueprint for The Byrds. But at the time, Donahue's massive appetites and extravagant mismanagement, combined with Autumn's lack of promotional muscle or distribution, leads to a major label sell-out to pay creditors, taking the artist roster - and the Brummels themselves to LA-based Warner Brothers. Drummer John Peterson quits after an ill-advised covers album, joins the Tikis, who become Harpers Bizarre in time to chart with Paul Simon's Feeling Groovy. Sal and Ron (a long-time diabetes-sufferer), with bassist Ron Meager hang on for the ambitious progressive indulgences of their Triangle album. But by then their moment has gone. Sal forms Stoneground. Ron does session-work for Randy Newman, the Everly Brothers, and Little Feat (Sailin' Shoes). Leaving the high points, in among the flawed and the flimsy here. Meanwhile - Billy Joel once sang "I could be a Beau Brummel, Baby / if you'd just give me half a chance." Well, Billy... perhaps, perhaps not, don't call us. For among the notable Bo's of our time, hipness of the Brummies' calibre is a rare and fleeting thing.