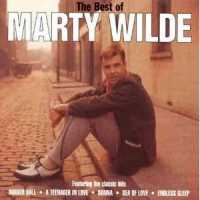 Coming slightly after Tommy Steele and Lonnie Donegan, but just before Cliff Richard and Billy Fury, Marty Wilde must rate as a significant ingredient in early Brit-pop, but he's one surprisingly under-represented in CD format. Until now...

Standing six foot, three inches, the former Reg Smith benefited from the Kray-like managerial skills of the legendary Larry Parnes, and the oddball televisual scams of the equally legendary Jack Good's Oh Boy show, both of which helped elevate Marty Wilde's brooding Presleyesque presence above all the home-grown competition. A grease-ball rocker at heart, in lime-green jacket and luminous socks, he's often unfairly dismissed as a cover's clone, and his hits on this 14-track compilation do include sly thefts from Ritchie Valens (Donna), Bobby Vee (Rubber Ball), Bobby Rydell (Little Girl), and the spookily macabre Endless Sleep (from Jody Reynolds).

Even his biggest single was nicked from the sublimely wonderful Dion And The Belmonts. But it was always more than just musical xerox. Morality aside, Marty's edgily growling interpretations often equal, and occasionally surpass the American originators. Teenager In Love is the definitive 1950s' pop song, wallowing in self-pity, wracked by adolescent doubt and uncertainty, all set to a fizzing tune. But where Dion's New York Italianate harmonies are exquisite, I still have time for Marty's more Anglicised teen-angst. And as it's a Doc Pomus and Mort Shuman song anyway, neither have exclusive rights to it.

While as early as December 1959's Bad Boy, Marty was minting his own material too. A minor American hit, trading on rebel imagery - "all the people down the street / whoever you meet, say I'm a bad boy," with its slurred wistfulness insinuated around a sparse guitar-led small group backing featuring stand-out session players Big Jim Sullivan and jazz drummer Phil Seaman, with future Shadows Brian Locking and Brian Bennett, this single is a neglected classic of early English rock.

Yet despite such strengths Marty experienced an abrupt commercial decline following the meteoric arrival of Harry Webb, which coincided with Marty's well-publicised marriage to Vernons girl Joyce Baker. Pop stars did not marry in 1960, even John Lennon long-contrived to conceal his first marriage for fear of alienating the dreams of possessive girl fans. But although he subsequently scored lower chart placings, Marty Wilde's creative input increased.

He wrote one of the strongest tracks here, the mean bluesy Tomorrow's Clown, and premiered the relentlessly sulky Ever Since You Said Goodbye with its low walking bass introduction. It was to be his last hit, at #31 in October 1962. But, even at late as 1969, his pseudonymous up-beat pure-pop Abergavenny proved a radio-play success, by which time he'd already gone on to write hits for Status Quo, Lulu - and then daughter Kim. It's Marty's voice you can hear singing back-up on Kids In America.

Meanwhile, there's still uncollected Wilde-iana to come, his version of Leiber and Stoller's 'King Creole' song Danny, which came 20 years before the release of Presley's own, and his fiery It's Been Nice, later covered by the Everly brothers. They'll do for volume two. In the meantime, this CD fills an important gap.