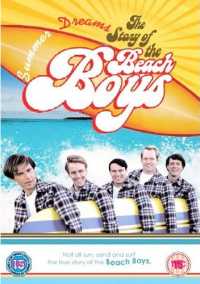 SUMMER DREAMS
The Story Of The Beach Boys

I was never really into The Beach Boys although I grew up on the west coast; we didn't do any surfing on the Solway Firth, we swam, built rafts and wondered what the brown froth was that drifted in with the incoming tide.

When I heard that Pet Sounds was The Beach Boys' Sgt. Pepper I just couldn't balance the innovative complexity of the latter with the poppy peppy summery feelgood of the former, having said that I had never actually sat and listened to Pet Sounds right through, the first Beach Boys album I did that with was Holland which I surprised myself by liking a lot. Pet Sounds was of course The Beach Boys' Rubber Soul, Sgt Pepper was what the Beatles were supposed to have done as a reaction to it, or so Brian Wilson claims.

This TV movie carries the disclaimer that it is based on an unauthorised biography and consequently includes imagined conversations and situations, also the soundtrack does not include The Beach Boys own recordings, that said the music is very fine and far from being a 1970s' style Top of the Popscover album (dates me).

The early part of the film concentrates on Brian Wilson (Greg Kean) and his brother Dennis (Bruce Greenwood) before abandoning Brian to rehab and concentrating on Dennis, who seems to have had a more interesting life. Early on we see Brian collecting Dennis from the beach to take him home to authoritative Dad Murry (Arlen Dean Snyder), Dennis stalls and says they have to call for burgers first at which point Brian pulls an expression of dismay, this is a joke equivalent to Mrs Presley complaining about the time their boy spends in the bathroom.

With brother Carl (Bo Foxworth), and cousin Mike Love (Casey Sander), the boys start a band to zone into the beach culture of surf and sand, cars and chicks; at first under the production aegis of Dad Murry, the real creative power is Brian and eventually creative differences force the boys to sack the old man. The pressure of song-writing causes Brian to crack and he increasingly takes a back seat to touring and performance, starts smoking weed and is soon the size of a baby elephant. The narrative drive of the movie subsequently follows Dennis, his loves and misadventures, and his occasional forays into pushing Brian out of therapy by popping up on his jogging route with a bag of doughnuts and a wrap of coke.

Dennis continues on his self-destructive way, the passage of movie time charted by the appearance and disappearance of facial hair. Murry dies and Brian and Dennis don't show at the funeral. In what seems like an act of spite Dennis marries his cousin Mike Love's alleged lovechild Shawn and trundles along to his inevitable drink-fuelled self-destruction.

This is a pretty good introduction to The Beach Boys and for all the necessary disclaimers seems to follow the known story pretty closely without taking sides. There is something of the inevitable compression in the 90 minutes, the Beatles appear on the TV news, Brian spends all day listening to Sgt Pepper, the band watch Hendrix at Monterey while one of them says "he did this at the gig we were supposed to be headlining"; in fact much of the band's life in the 1960s and 1970s appears to have been spent parked in front of the box. Early on there is the classic Hollywood take on song-writing; looking at Dennis' rich-kid girlfriend in her new car, Mike Love notes "they'll have fun, 'till Daddy takes the T-Bird away."

The studio scenes, with the specially recorded music, do have the required effect of making you want to go back to the music and appreciate those complex arrangements. There appears to be no mention of Brian's uber-project SMiLE, presumably because the surviving family and group members are still locked into ongoing litigation.