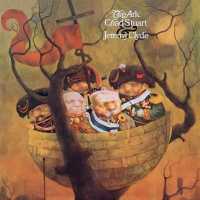 Wimp-folk..? Peter and Gordon rode in on a trilogy of cast-off Paul McCartney songs. Chad Stuart and Jeremy Clyde hung out around the folk clubs until CBS slotted them into the Peter and Gordon template, in which guise they scored an American top 10 hit with the winsome Yesterday's Gone. Win-some, lose some, the polite well-bred lean-faced duo with their new California tans guested on the original and the best Batman TV series, and charted a couple of lesser singles.

When the hits stop they up-geared into the psychedelic-fantasia changing times Of Cabbages And Kings complete with its five-movement Progress Suite. Then, despite its large-scale failure they followed it with this - The Ark (August 1968), produced by Gary Usher, and their final major-label moment before getting dropped. With its title both a reference to Noah's biblical flood and a metaphor for the world's renewal, this quintessentially English carnival of ornate baroque 1960s' pop, with swooping woodwind, harpsichord, multi-layered vocals, antiwar nudges, sitar and soft seashore-effects, assumes all the correct poses without ever actually contributing the vital alchemy to shove it over the edge into greatness.

The Emancipation Of Mr X is one of those well-respected men who take off their business suits to rediscover their inner child and go skinny-dipping in the park. There's a Letter To A London Girl (Transatlantic Trauma) from Boston, complaining that Chad's uptight and Jeremy broke two strings on stage. There's The Raven, a strained chamber-folk string-quartet. A Sidewalk Requiem which - although not stated as such, commemorates the shooting down of Bobby Kennedy at the Ambassador Hotel in L.A.

Titles such as the decorous acoustic instrumental Pantheistic Study For Guitar And Large Bird promise more than they deliver, there's some of the fey delicacy of Simon & Garfunkel with little of the poetic precision, while the closer You Need Feet is one of those irritating silly-voiced novelty vaudeville sing-along tracks you tend to skip over unless sufficiently stoned to find it amusing.

Inevitably, over the years since, the 'I-can-be-more-obscure-than-you' archivist tendency has elevated these 12-inchers into lost gem status, instigating a reunion tour, and this digital expanded reissue, inviting reappraisal. So is it the masterpiece that cultists claim? Well, it depends on your definition of classic. Maybe, like he says on 'Feet, it's not to be sniffed at. While certainly Peter and Gordon never got this high on vinyl!