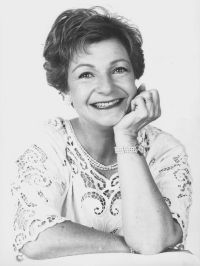 It's an hour before the first performance of The History Boys at the National Theatre, and on the balcony outside the Olivier stalls, Ruth Leon basks in the blazing sun, sips a Diet Coke and waits for her husband, fellow theatre writer Sheridan Morley, to arrive. Both are reviewing the play for their respective papers... But Ruth Leon is not a woman who wastes a microsecond of her life, and while she waits for Morley ("he'll be late anyway," she smiles), she is also meeting an American writer friend, chatting to Alan Bennett (also there for the performance) - and talking about her new book on George Gershwin (entitled simply Gershwin, though Leon preferred 'I Got Music') from Haus Publishing.

Being around Ruth Leon is an exhilarating experience - the energy levels and vivacity are impressive enough, but then the listener is regaled with anecdotes of the people this most industrious writer/ editor/ producer has worked with: an astonishing line stretching from Leonard Bernstein and Stephen Sondheim, back to earlier giants of American music such as Agnes de Mille and Aaron Copland. Leon's effortless conjuring up of these larger-than-life personalities is vivid enough, but when Sheridan Morley arrives - another theatrical anecdotalist of non-pareil skill - it would be a brave conversationalist who'd dare to interrupt the flow.

But, although Morley and Leon are undoubtedly the British theatre's premier writing duo, there is no question whatever of Leon being in the shadow of her illustrious partner. Her own achievements - as biographer and theatre and TV director - have gleaned immense acclaim, and her antecedents (from Jewish East End via New York) have consolidated a cool professionalism that matches the effortless charm. The writing of the Gershwin biography went well - she "fell in love with her subject," she says.

RL: But then I came to the last chapter - and it was pointed out to me I'd reached a major sticking point. But perhaps I should get to that later...

I don't know whose idea it was I should tackle George - perhaps it was Barbara Schwepcke of Haus - she's very good at matching biographical subjects to authors - or perhaps it was my idea. In any case, the writing and research went winningly - despite the fact there was a huge mountain louring in my mind's eye - Edward Jablonski's massive Gershwin biography. He was a mentor of mine, and crammed into his New York apartment was this unbelievable mass of Gershwiniana: I was working on the TV series The Great American Songbook, and Edward said "Would you like the music for an unperformed Gershwin song?" And - "Would you like to see some rare Gershwin home movies?" I tried to nod in an offhand way, as if my pulse wasn't racing a mile a minute. But my book is more concise than Edward's, and not aimed at the hardcore Gershwin scholar. Just those who love his music - and who doesn't?

Does this include the young these days - or are Gershwin lovers generally more mature?

RL: It's absolutely the young - people like Jamie Cullum and Diana Krall perform the songs of Gershwin, and Cole Porter, and their young audience can't get enough of them! But who can blame them? They haven't got any music of their own worth a damn - most songs written today are thin gruel indeed. And then they hear this material that has wit, sophistication, tremendous melodic invention. For those who have ears to hear, it must be a revelation.

Mention of Cole Porter leads Leon into talking about her next book, a biography of that other Broadway song-writing giant. Pulled back to the subject under discussion, Leon still can't resist comparisons between Gershwin, Porter and the other key composers of the golden era.

RL: Cole Porter was, of course, the only great Broadway composer who wasn't Jewish - Jerome Kern would joke to him about his being the only goy doing this work. But Kern's Jewishness isn't central to his work, and neither was that of Irving Berlin or Richard Rodgers. But George's Jewishness informs his work in an unmissable way. From the Rhapsody In Blue and the Piano Concerto In F - even Porgy And Bess - through so many of the songs, there are subtly transformed Jewish harmonies, and both he and his brother Ira married this Jewish sensibility with a very American ethos - the essence of the Gershwin's genius.

Leon had mentioned that she had fallen in love with her subject. How did this compare with subjects of her earlier biographies, Judy Garland and Marilyn Monroe?

RL: Very different indeed. The more I got to know those two women - great talents though they were - the less I liked them. But George - everybody loved him! Some were jealous, of course, but that protean genius of his, combined with that very winning personality - swept all before him. And unlike such composers as Berlin and Rodgers, who possessed forbidding, un-ingratiating personalities, George was a total charmer. And he liked nothing better than sitting down at a party and rattling off his songs to the adoring guests.

Writing the book, I was reminded that Gershwin was America - the America of his day. The skyscrapers, the jazz age, the optimism - even the 'live fast, die young' ethos that became emblematic for both him and F. Scott Fitzgerald; any book about Gershwin that doesn't take that on board is missing a crucial element. Most of all, though, being with George was a truly life-enhancing experience... which was why, as I neared the end of the book, Barbara had to point out something I hadn't acknowledged to myself.

She was nagging me for the final chapter, and I was bluffly maintaining that all was well, that everything was on courseï¿½ but it wasn't. Why hadn't I delivered it? Barbara looked at me coolly and said, "Do you know why you haven't written that last chapter yet? Because you don't want to make him dead. And that's the way your book has to end." My God, I thought, she's right! But I had to let him go. After all, I've got Cole Porter next...