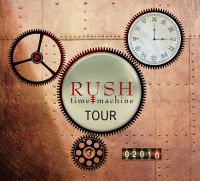 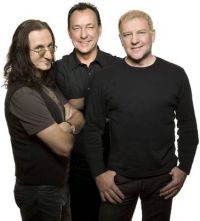 REAL TIME
Opening with perennial favourite The Spirit Of Radio has become a tradition for this Canadian trio, and it's never disappointing because it's one of Rush's finest, and most popular, songs. There was an intro video before this, too, depicting a real/ reel history of 'Rash', spoofing the group's early days with comical caricatures for a skit episode in a diner, where Neil Peart plays an Irish cop, and Alex Lifeson wears an obesity suit, to lampoon their manager Ray Daniels, while the gig is constantly being interrupted by sausage gags. Time Stand Still, Presto, Stick It Out (with stunt imagery of tortuous duress), and then Workin' Them Angels all follow in quick succession before this busy evening's first instrumental track, Leave That Thing Alone.

Geddy Lee introduces a new song BU2B (from their forthcoming album, 'Clockwork Angels', due next year), which begins a sequence - including Faithless and Freewill - that I promptly dubbed their 'atheism concerto'. Several songs by Rush contain hints and references to secular humanism, but BU2B (brought up to believe) is perhaps the band's most radical and critical statement against religion, to date. A backing-screen video accompanying BU2B highlights the potent image of a censor's marker-pen as it blacks out one printed line: 'learning and thinking'. Next up, we had Marathon, and Subdivisions (with some recycled imagery plus newly shot video) which brings us to a welcome intermission.

HALF TIME
Another sketch from the 'history of Rash' preludes the band's return, and continues a performance target of "more comedy, less music" - achieving the first goal with loony tunes farce about making a Rash music video, with Lee playing the arty-farty director, and Peart on cameraman duty, while Lifeson reprises his choice heckling role as band manager Ray. For this short film, Lee wins the best-in-show 'bad pun award', with his exclamation "Stop moving pitchers!" aimed at the German barmaids who chorus-line into view carrying beer jugs. Peart joins in the fun 'n' games a bit reluctantly, it seems, but then compared to boisterous improv maniac Lifeson and front-man singer Lee, lyricist and drummer Peart is the stoic intellectual.

Tom Sawyer is followed by sci-fi dystopia of Red Barchetta (which showcases a much improved video), enormously complex instrumental YYZ, and Limelight, all of which precede centrepiece song, The Camera Eye (from Moving Pictures), never previously played live before the band's Time Machine tour. This song is enhanced greatly by the backdrop film, of New York and London streets, which has time-lapse and speeded-up footage that's clearly yet suitably inspired by Godfrey Reggio's documentary movie Koyaanisqatsi (1982). The brooding Witch Hunt, and then a superb rendition of Vital Signs, lead us towards another brand new song, Caravan (the A-side to single release BU2B), about "a world lit only by fire" is top contender for a steampunk anthem that benefits from a fabulous live performance, with sci-fi subgenre influences concerning 'the future as it ought to have been'.

BASS TIME
Love 4 Sale is Peart's new drum solo, performed on his latest revolving kit, against a backdrop of CGI animated video. If he was only a drummer, Peart would be a musical genius. Give him some buckets, tin cups, and hub-caps, and he'd still probably make a sound like the stamping feet of angels (working). But he is also a true poet, writing many lyrical commentaries loaded with philosophical insights and humane wisdom. There's a superb 12-string acoustic intro by Lifeson, for Closer To The Heart, which segues into the familiar 2112 Overture, and Temples of Syrinx. The video for Far Cry offers intelligent use of surrealist symbolism, in quiet resignation (without despair!) over the world's failure to aim for, let alone go walking down, any pathway towards a utopian 21st century.

The band's encore kicks off with a polka intro their acclaimed instrumental, La Villa Strangiato, and here a couple of Lifeson's magnificent solo riffs of layered complexity do sound like he's actually playing two guitars at once. With the quirky novelty of its lengthy reggae intro, Working Man - an early Rush classic, is played as the finale. The programme notes, penned by Peart, describe their offbeat creative process underlying the band's two new songs; while lamenting the collapse of the record industry which has resulted in the closure of many top studios.

SAUSAGE TIME
Rush are world-class musicians, composing electrifying material with almost classical aspirations. They are not egocentric rock stars with (often grotesquely overblown) illusions of grandeur. That's mainly why this greatest of great bands have always remained less famous than others. However, fans of Rush may take consolation in the plain fact that Rush have no peers, anyway - when it comes to rock music of such quality and vision, whether it's recorded or played live. No hype. No exaggerations. No mouthy swearing. No swaggering (mis-) behaviour. Rush are a rock band producing a sustained musical brilliance with a consistent ingenuity that simply cannot be matched.