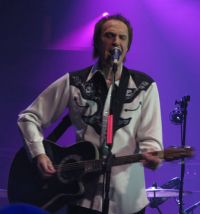 Obviously he's a seasoned performer, a veteran showman, held in such great esteem by fans of Brit-pop that you might expect him to walk on water... if he was playing at an end-of-the-pier venue. Ray Davies is quite amazing!

Here's a perfect example of rock 'n' roll showmanship, with a fine backing band (the drummer was especially good). Davies performs a mix of songs from his recent solo album, Other People's Lives(which seeing this gig prompted me to buy), and many classics by The Kinks - including: Waterloo Sunset, Celluloid Heroes, Days, Autumn Almanac, Where Have All The Good Times Gone, Dead End Street, Sunny Afternoon, and my favourite Kinks hit, You Really Got Me, which brags a youthful and yet timeless energy, in marked contrast to the archly nostalgic whimsy of some other Kinks' songs first composed and recorded later.

Ray talks about his brother Dave, the curious lifestyles in New Orleans (where Davies lived for a while), the essential power of music as sustaining or healing touchstone in all our lives, and he cheerfully admits there are some old instantly familiar songs like Lola, and Dedicated Follower Of Fashion, that he knows he just cannot escape from...
"You want another one?"
'YES!'

Southampton Guildhall was the last gig of Davies' UK tour in 2007, and it felt very much like a celebration of his life's work, so far. After the third encore, he simply gave up pretending, rushing back on stage with boundless enthusiasm and a jovial, "Oh, there's one more song we forgot to play!" To sum up how great the concert was, when he played Come Dancing (which, I have to confess, is a song that I really hated when it was first released - for being cheesy Top Of The Pops fluff, and so rather too corny for my taste), complete with the keyboards' player on accordion, even I really liked this live version.