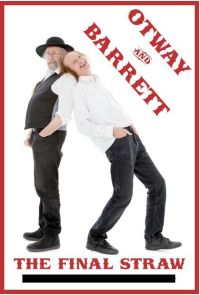 OTWAY AND BARRETT
The Final Straw

I never imagined I would ever see Otway and Barrett in concert. Not high on my must-see live list, and I did not know they were still going either; they were just a blast from the past. A time spent sat on the floor of my big brother's room, probably bothering him regarding his latest musical discovery. His electronic invite to see their Final Straw tour came in a different time, as today I struggled to recall their albums beyond the hit record Really Free, or Racing Cars. However, as the gig was really really free (as in my brother was paying), along with my desire to see them perform these iconic songs, I just had to say yes and am so very glad I did.

The Quay Arts Centre is one of those intimate little theatres where it's perfect to see a live act as you are so close to the performers it is possible to have a conversation with them, and there was no shortage of banter between John Otway and 'Wild' Willy Barrett during their performance that night. Later than advertised, Otway snuck in first and sat to one side greeting his audience while checking a guitar, then, as the 200 or so people finally took their seats, Barrett made a proper entrance to some applause. The concert goers were a bit of a sight and looked like the staff of Hogwarts. It was the Sunday night show as Saturday was thankfully sold out and, as Otway gave a cautious introduction Barrett began the comedy with the line if you don't like the show there are no refunds.

One two three four, are you ready one two three, and straight into Louisa On A Horse - not a song I'd remembered hearing before but a fine start as an ice breaker. Otway talked his way through the evening while Barrett changed instruments and kept his companion to the play list. Separated was the next song and by now Otway was strutting his stuff, he is no Jagger but has his moves which is not bad for his mid-sixties year, although his facial contortions made him look a bit like Gollum, sorry John.

Then a highlight for me as Otway spoke of his attempts to be a rock star, appearing on Top Of The Pops and the Old Grey Whistle Test back in the 1970s, before they played Really Free - this was so damn cool and got such a response both before and after I am surprised they did not play it again later as an encore. Racing Cars was another favourite of mine with the omission of either performer saying "I really like going fast" the preamble to this song on the original record. This from the days of James Hunt, British world champion formula one, a sport I still watch today, and Racing Cars was played excellently by Barrett on his homemade coffin-shaped slide guitar, one of his experimental designs he made to sound like a racing car, and it's bloody brilliant. Both of these songs were from their album Otway & Barrett produced by Pete Townsend in 1977, pre-punk, in Jubilee year, this must have been the perfect antidote to all that pomp and circumstance, so rock on.

Otway was the songwriter but could not really play? Allegedly, while Barrett was the musician, and boy could he play them. During the songs Cheryl's Going Home, Natasha, Two Little Boys, and Duelling Banjos, Barrett played a variety of instruments - his guitars, fiddle, balalaika - at a furious pace, and even a wood-saw whilst cutting through a cheap acoustic, but the wackiest was the wah-wah wheelie bin. My favourite though was Otway on the Theremin, with shades of Ron Grainer's Doctor Who theme; I must get me one of those magical instruments. Just how does that work, never mind could I play one?

Otway's comedy antics were musically, too, when he used pocket pads to tap out the beat on a drum machine to the song Body Talk, and the duo played the most eclectic mix of instruments I have ever seen, including bagpipes. A lyrical high was Otway singing his new unreleased song The Snowflake Effect after reading about them in a science magazine. This was an intriguing concept as we are all unique (almost), then science discovers identical snowflakes and, like John Otway, I was gutted.

Otway and Barrett played bantered bickered and bitched their way through the evening's entertainment as they both spoke of their splits, break-ups, separations, and divorce. Barrett repeatedly stated this was the last tour while Otway doubted it was the end of the road... Their age required an interval, their youth earnt them two encores, I only wished they had done Otway's Frightened And Scared though I guess as that was on vinyl without Barrett they didn't. Either way I am glad to have seen them live, be they folk, pop, or fringe rock, Otway and Barrett rule.