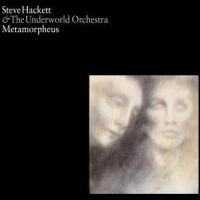 Steve Hackett, former guitar wizard of Genesis, latterly solo artist who has successfully re-mastered his early works, has always been a classical kind of guy. An early brief solo on Foxtrot was a hint of what was to come. With Metamorpheus, Hackett's sensitivity, classical leanings, playing dexterity and compositional skill come together to create a wonderful tapestry of music.

Metamorpheus is basically Hackett and a string orchestra, augmented by other instruments occasionally heard, including flute and piccolo played by his brother John Hackett. The music is split into 15 tracks, but many run into each other. Sometimes it is Hackett alone, sometimes it is just the orchestra, and sometimes everyone plays together. The theme is the Greek myth of Orpheus.

The first track, The Pool Of Memory And The Pool Of Forgetfulness is a plaintive yet gothic merging of classical guitar and orchestra. The theme bears a distinct resemblance to a hobbits' song from the BBC's adaptation of The Lord Of The Rings - a coincidence, I am sure, since an artist of Hackett's calibre could never borrow. Hackett has long been on record as saying he has a gothic side (albums such as Defector bear witness to that claim) and on the opening track it is clear. To Earth Like Rainis an upbeat, spring-like guitar piece that leads into two orchestra-based tracks. One Real Flowerreminds me most of Hackett's early solo work.

The Dancing Ground is a wonderful waltz featuring orchestra and guitar, concluding with a spine-tingling solo violin - another gothic conclusion. That Vast Life is a slow piece, before the classical pyrotechnics of Eurydice Taken. In Charons Call, the hobbit-like theme returns, leading to a new theme created from a run of descending notes. There is an almost gypsy feel to the violin on this track, intense and personal. Cerberus At Peace follows, a weird orchestral interlude with glissando strings.

Under The World, Orpheus Looks Back is the one track that I feel is out of place, largely because of the military rhythm that underpins it. The track itself is moving and superbly orchestrated, but the rhythm jars with the rest of the music. Another classical interlude leads into Severance, which is clashing and dramatic. Elegy features John Hackett's flute, before we are into Lyra, which is a big orchestral finale featuring the theme of Charons Call. The CD ends with a gorgeous solo coda.

I don't listen to a huge amount of classical music, but this is one I will return to. The combination of the classical guitar, gothic strings and terrific music can't be ignored, and I regularly find myself humming the two main themes of this music. Anybody who feels sympathy with the classical side of Hackett's solo work, or even with his acoustic guitar playing on the Genesis albums, will get a lot from this CD. The fact that it is not rock music, nor even fusion, should not put people off.