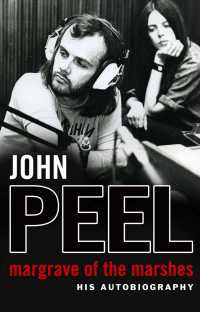 MARGRAVE OF THE MARSHES
autobiography by John Peel

A hard review to write, this one, as I had to keep stopping to listen to some tunes by many of the bands mentioned in its pages. It took a while longer than it should have, but I had a good time. I had to warm up the vinyl turntable to play things at the wrong speed, though.

This book is the one you want if you are after the John Peel the world knew and admired, who surprisingly turned up as #43 in a fairly recent list of 'Great Britons'. There's no muck-raking to be found here, and any great detail is lacking. Only disappointment awaits the reader whom expects a blow by blow account of each and every session The Fall (Peel's favourite band) ever recorded for his show. On the other hand, this is a fine collection of anecdotes and examples of Peel-style humour, written by the man himself and his surviving family.

It has to be said that only the first 200 pages (less than half the book) were actually written by Peel himself, a project obviously left unfinished at the time of his death in 2004. His section of the book leaves us at the door of a Mexican brothel sometime in the mid-1960s, which, as cliffhangers go, is fair-to-middling. The story is then taken up by his wife Sheila, with assistance from his sons and daughters using diary entries, press cuttings and their own recollections. This doesn't jar as much as I expected it to, as the tone of the book stays pretty much the same (ie. laid back).

Besides a few surprising incidents, such as being in the same room as Lee Harvey Oswald (and also Jack Ruby) in the aftermath of the Kennedy assassination, and an incident involving a speedboat, a womble, and Tony Blackburn, this is merely the story of an amiable chap who had great enthusiasm for a wide variety of musical styles. He wasn't as great a meeter and greeter of the stars as you may think (his friendships with The Faces and Marc Bolan are the exception to the rule) but if the idea of a grumpy Captain Beefheart phoning you up at any hour, and Belle and Sebastian getting everybody blind drunk on White Russians at a home recording session amuses, well, that's in here at least.

Enjoyable and amusing, it is in all a fitting tribute to the man who can claim to have influenced generations of listeners, and who brought many a fine band (as well as more than one unlistenable racket) to the public ear. Nice chap, nice book.