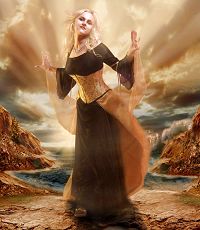 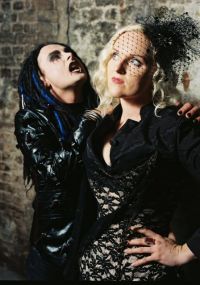 Arguably one of the first gothic metal bands to employ male death metal growls with female soprano croons (which some critics have referred to as 'beauty and the beast' vocals), Theatre Of Tragedy in the mid-1990s created a melancholic and romantic style of gothic metal. Other bands, such as Tristiana, Trail Of Tears, and The Sins Of Thy Beloved, have followed in the footsteps of this trendsetting band.

Vocalist Liv Kristine Espenæs Krull was with Theatre Of Tragedy from the beginning, and she evolved with the band through the years. I spoke with Liv, and let her know that my favourite Theatre Of Tragedy album was 1996's Velvet Darkness They Fear. Interestingly, it was Liv's favourite as well. "Thank you for your compliment!" she said.

LK: If I'm allowed to have a personal favourite, I would mention the same album as you. This was the time when Theatre Of Tragedy had reached the peak of the band's artistic development. Moreover, this was the time when we had the most pleasure and joy within the band.

As with all things, Theatre of Tragedy followed its own path, switching its musical style with the release of 2000's Musique. Gone were most of the metallic and gothic influences, with the band instead focusing on more of a techno-driven sound. Although facets of Darkwave showed through on occasion, the style shift was obvious, and not all the band's fans were pleased with the results. The 2003 release of Assembly continued in a similar vein. "In Theatre Of Tragedy, everybody was involved in the music-making; however, the main ideas often came from Raymond (Rohonyi, the band's male vocalist and mastermind)," noted Liv when asked about the style change.

LK: I enjoyed and understood the changes on Musique and Assembly, as it was a natural development. Raymond's musical taste had changed, as well as the ideas of the members. Still, it is a fact that I grew up with bands like Black Sabbath, therefore melodic metal is the music I'm most familiar with and influenced by.

In 2003, Liv left Theatre of Tragedy. Before her departure, she had worked on a solo project. In 1999, between Theatre Of Tragedy's Aegis (1999) and Musique, Liv released Deus Ex Machina.

LK: That was my first solo album... It was a collaborative effort between me and a producer in the producer's studio. I learned a lot during the recordings and after the release. My next solo album (which will be released in the autumn by Roadrunner Records) will be recorded here at our own Mastersound Studio, and I will be more involved on all levels concerning the album. Also the lyrics will be written by me. I want to identify with what I sing. I feel more comfortable then.

During the recoding of Deus Ex Machina, Liv had an opportunity to work with Nick Holmes of Paradise Lost. "I loved it!" she said of her experience.

LK: I've been a huge fan of this band for the last ten years. Nick is a wonderful person and a great singer. He visited me in the studio as Paradise Lost were touring Germany at that point of time. If I get the chance, I would love to do a duet with him again.

Soon after her departure from Theatre Of Tragedy, Liv formed Leaves' Eyes. Joining her on this new venture was the German band Atrocity, which includes vocalist Alexander Krull, who also happens to be Liv's husband. I asked Liv if the band's name was inspired by the sound of her own name.

LK: You're right, [laughs]. It sounds like my name. I had written a concept and I asked my friends from Atrocity to record some ideas for it with me. We experienced an artistic explosion, and after a couple of months the album was finished and we had a record deal with Napalm Records.

Titled Lovelorn, the band's debut album was much more personal, emotional, and intense. Liv describes the sound on the album as follows: "Bombastic, emotional, both heavy and melodic. It builds up on contrasts and feelings. The sound, the lyrics, the concept - everything is strongly connected to each other."

I then asked Liv about the lyrics on Lovelorn. The words touch upon nature, particularly large bodies of water like seas and oceans. Liv agreed, saying that "I lived 20 years by the North Sea in Norway. I love the extremes in nature and of the seasons." Liv went on to explain the lyrical concept behind Lovelorn

LK: The concept includes two love stories; one is fictional and involves a couple and a sea maid, whereas the other one concerns my love towards Norway, especially nature at the west coast and my dear family.

Soon after working on Lovelorn, Liv had an opportunity to work with the mighty Cradle Of Filth. The song would be the title track of the band's 2004 release, Nymphetamine.

LK: We [Dani Filth and Liv] recorded the vocals here at Mastersound Studio after I suddenly got a phone call from Roadrunner Records USA to sing on the song... I talked to Dani on the phone to make sure that Cradle were happy with my vocals. Some weeks later we met in London's dungeons to make the video for Nymphetamine. We had a great time!

At the moment, the members of Leaves' Eyes are working on a new album. Here is what Liv had to say about what will drive the music and lyrics.

LK: Again, the album builds up around a concept. This time I've included a love story with an actual occurrence in our history. Moreover, nature is the stage for the happenings.