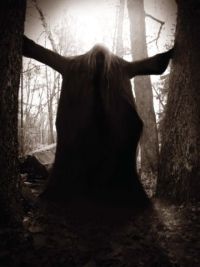 Voice Of The Forest
KORPIKLAANI

In 1993, a Finnish guitarist-vocalist by the name of Jonne Jarvela formed a band he called Shaman. Combining his love of Finnish folk music with the extreme style of music known as heavy metal, Jonne and his colleagues began to experiment. In 1999, Shaman released Idja, which was recorded using the Sami language. The Sami people live in Lapland, the name of a region in northern Europe that encompasses Norway, Sweden, Finland, and Russia.

Between the summer of 2000 and the summer of 2001, Shaman took a much-needed break. During that break, Jonne tackled a guest stint with the mighty Finntroll. In 2002, Shaman released Shamaniac, and one year later, Shaman was gone, replaced with Korpiklaani, which means 'forest clan'.

"It isn't actually two different bands," explains Jonne. "Korpiklaani was formed during the recording of the Spirit Of The Forest album [Korpiklanni's official debut]. We were earlier known as Shaman, but suddenly there was another band that named itself Shaman. As it happened, the band consisted of ex-Angra members, so they weren't very 'tiny' even from the beginning. So, we had to change our name, even though we were a much older band."

Jonne's musical odyssey that would lead to the formation of Shaman/ Korpiklaani began when he left Finland to take a break from it all. "I can say that everything started when I moved from the south of Finland to the northern part of the country at the beginning of the 1990s - actually, the year was 1993," remembers Jonne. "Up north in Lapland live the Sami people who have their own language. The Sami people originated in Finland, much like the [Native Americans] did in America. I became familiar with these people, and suddenly I was living with them in the very deep part of the forest. Of course, we started to play music, and soon after that I found myself participating in gigs dedicated exclusively to this type of acoustic music."

While living in Lapland, Jonne formed a group known as Shamaani Duo, which recorded an album of folk music. "I then moved to the south of Finland," he recollects. "I continued making this type of music, but this time I formed a new band. Shaman was born."

Shaman was run like a solo project, with an eclectic mixture of musicians on hand to steer the sways and moods of mastermind Jonne. "It was people from Finntroll and Barathrum, and so on," Jonne says. "But then I found the right mix of people, and we began to create a sound with the right sort of feel. This band became Korpiklaani."

Spirit Of The Forest pushed the boundaries of both folk-based music and extreme music. Unlike bands like Finntroll, Korpiklaani achieves a balance between both genres, with each feeding on the other. I asked Jonne what, musically, goes into creating the Korpiklaani sound?

"It is nice that you have noticed our way of making music," Jonne says. "It is just that we try to blend folk and [heavy] metal so that it can become its own distinct musical style. It is easy for us because this is what comes when we play, no matter what we play. If we were to play some Motorhead just for fun, the sound would come out as folk metal. This sound comes from the instruments and the band members who play them. It is our sound."

Both Spirit Of The Forest and Voice Of Wilderness tap into hummpa, a Finnish style of music that is akin to polka.

"I have always listened to metal music," notes Jonne. "But folk music is strong, both in Finland and in me. My dad and most of my uncles play hummpa and Finnish folk stuff, so it's been a big part of my life. My grandfather was a great accordion player also and his playing is all that I remember about the man. When I let the music flow freely from inside of me, you can hear it on the Korpiklaani albums."

Helping Jonne create this unique blend of folk and metal are Hittavainen, who plays violin, flute, and jouhilkko (a Finnish lyre); Ali, who handles percussion; and Juho, who belts out vertical riffs on the accordion. On the more metallic side are drummer Matson, guitarists Honka and newcomer Cane, and bassist Arto.

One of the remnants from the Shaman years is the strange icon that appears on every Korpiklaani release. "It's a man who has a drum in one hand and a drumming hammer in the other," says Jonne. "It's an old Finnish symbol that has been found on rock paintings throughout Finland. It is sort of the symbol of this band."

The band's albums tap into two principal subjects: beer (e.g. Pellonpekko and Beer Beer) and nature (e.g. Pine Woods, Before The Morning Sun, and Spirit Of The Forest). Jonne sees the lyrics as his way of communicating a unique perspective.

"The lyrics are very Finnish, particularly when they speak about the 'world,' such as forest life, drinking beer, and more shamanistic subjects," he says. "My own life is my main inspiration. I like beer and I like forest life, so it's what I write about."

The band's latest release is Voice Of Wilderness. The majority of the songs were written and performed in English. The only exception is the track Kädet siipinä

"It means 'hands as their wings,'" reveals Jonne. "I sang this one in Finnish - it is the only song done that way."

Another strangely named track is an instrumental with the title Ryyppäjäiset. Not surprisingly, the title has something to do with alcohol: "The title means something like 'beer or booze drinking party.'"

But there's more to Korpiklaani than just folk music. As demonstrated on tracks such as Fields In Flame and Pine Woods from the Voice Of Wilderness album, the band loves to rip loose with guitar riffs straight out of power metal and percussion that borders the fringes of thrash metal. If the riff on "Pine Wood" doesn't make you break into air guitar, you understand nothing about power-based extreme music.

With Voice Of Wilderness completed, Korpiklaani is presently working on new material for a third album.

"We have lots of new songs and we plan to go into the studio sometime in December of this year," reveals Jonne. "We will again make the album in Fantom Studio because everything went so fine last time. I think our next album will be out sometime in the Spring of 2006."

Voice Of Wilderness has made quite an impact in Finland. Not only did Korpiklaani chart #1 in the Nordic video list on 27 January 2005, but also the President of Finland, Tarja Halonen, received a copy of the album while attending the Faces Festival. Jonne's son Jommi presented the dignitary with the album.

With its eclectic mix of folk and metal, Korpiklaani may make for a strange concert experience, but the band is on tour, not only playing at festivals but also concert halls in Finland, Sweden, Germany, and Russia. The band has played with bands such as Behemoth, Tyr, Moonsorrow, and Battlelore.

"It would be so great to see you all at the gigs soon," Jonne says enthusiastically. "I really hope that we get some more tours started! See you then!"