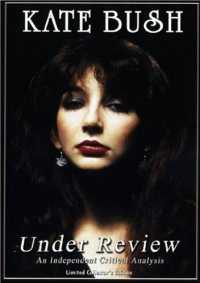 A biography of Kate Bush, one of the most reclusive (though she would doubtless use the word 'normal') artists we have, is an interesting proposition. Do you badger the artist for in-depth interviews? Approach her colleagues, friends and family? Utilise as many press cuttings and interviews as possible? Rob Jovanovic goes for a mixture of the latter two possibilities, the former being pointless, if not impossible.

Revised and updated to include the 2005 double CD release Aerial, this book covers Kate Bush's life, concentrating on her upbringing and early work, for which there seems to be much more available material. The chapters on her life and work post Hounds Of Love (1985) are noticeably thinner in content and shorter in length.

Kate Bush is an extraordinary musician. I quite understand why she was put in the top ten of BBC2's Living Icons. There is an intense Englishness about her, a streak of the Gothic, a deep musicality, and great humanity. Her music will stand the test of time.

Rob Jovanovic has done a good job of presenting the life of this enigmatic person. Beginning with her early childhood, he illustrates the closeness of the Bush family, their artistic qualities, and how these factors contributed to the nurturing of Kate's talent. Images of her rushing home to play a harmonium in the family barn make absolute sense. She was a natural musician, with a penchant for writing songs. She liked Elton John because he was a singer-songwriter, working with the piano as his compositional instrument.

The chapters describing Dave Gilmour's involvement are fascinating. That he helped the Bush family in their own right and with EMI (Pink Floyd's record label) is well known, but I didn't realise he helped for almost three years through thick and thin, culminating in a recording session financed out of his own pocket. Clearly he saw the talent, though her voice - an acquired taste in those early days - was a cause for thought. The chapter following Kate as a teenager in London is also illuminating, especially where it describes her dance work with Lindsay Kemp. Also fascinating are the contractual and musical tussles surrounding the release of the first album, The Kick Inside and in particular the first single, Wuthering Heights. It was in fact a matter of luck, as well as persistence, that meantWuthering Heights was chosen.

Through her life, Kate Bush comes across as a driven, sometimes stubborn, often obsessive and always intriguing person. The section describing her work with the Trio Bulgarka - they spoke no English and she no Bulgarian, yet they bonded at once - illustrates her perfectly. I remember hearing an interview with her on the radio where she was asked to bring in some of her favourite records. One of the pieces she brought in was a cassette of her own, where two different pieces of music (one Arabic, as I recall) had accidentally been mixed, resulting in a random collaboration.

This is an excellent book, rewarding reading and very well put together. The latter chapters inevitable seem weaker than the earlier ones, but this is no fault of the author, rather it is because Kate Bush desires a normal family life away from the spotlight. She is baffled by the modern interest in celebrity for her own sake. Highly recommended.