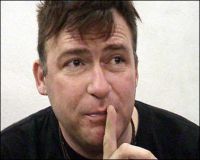 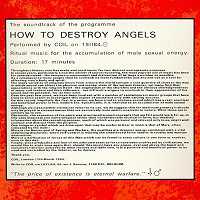 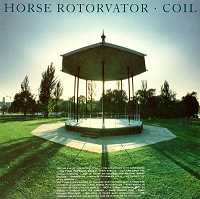 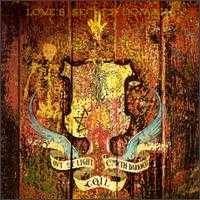 Nobody made music as beautiful and scary as did John Balance, who died on 13th November 2004. There are those who have composed scary themes and also beautiful tunes, but Balance, living up to his magickal nom de theatre musicale, authored pieces that achieved both in one. Taking their cue from Throbbing Gristle, John Balance and his partner, Peter Christopher, formed Coil with a manifesto of invoking their "male sexual chemistry" as sound. The first release was How To Destroy Angels, 17 minutes of undulation pressed on one side of vinyl only. The sleeve instructions inferred that boring heterosexuals might not get full value out of the disc, and I certainly found myself unaffected by it. Their first LP, Scatology arrived in 1985. Music was generally falling flat elsewhere, what with the corporate murder of pop on one side and the avante garde extremes on the other. There was something to listen to here and here only that summer. Scatology was music deformed, mutant rhythm, gorgeous and unpleasant, tender when it wanted to be, arrogant and violent when it needed be. Scatology was a collection of horror stories, a tribute to the grossest of inspirations, shock pivotal moments in art, inventive serial killing, blasphemy and breaking news iconoclasm, the making of money out of shit, a defiantly ironic theme for a first album. It opened with Ubu Noir, an insanely regal tribute to Alfred Jarry, and ran on with Panic, a controlled assault of guitar, sampling and growled vocals. Godhead <=> Deathead (aka: Godhead Turns Deathead) was the terrifying highlight, a provocative attack on Catholic iconography, and the churches stance on homosexual love. "Virgin Mary, weak and wild/ rids herself of an unwanted child.../ price of love, pain to pay/ for a quick visitation in the hay." The clank of instruments, the painful, imitation Theremin scour and the angry, hurt and hurtful, vocals are devastating. Jim Thirlwell, in his Clint Ruin guise, contributed heavily to the LP, as did Gavin Friday and Stephen E. Thrower.

Thrower became the fully-fledged third member of the band for their second LP Horse Rotorvator, largely inspired by Pier Paolo Pasolini's final film Salo and the director's not unrelated death. The Anal Staircase was the unflinching and frightening opener on the album; all fraught warning strings with an infusion of children's giggles, crunching horn and a sure delivery into hell, the promised "dizzying descent." Ostia ('The Death of Pasolini') is a sombre acoustic guitar and violin lament, fragile and sin espera. There is a gorgeous cover of Leonard Cohen's Who By Fire with backing vocals by Raoul Revere (the unmistakable Marc Almond). The First Five Minutes After Death is a strangely inviting, electro-fanfare, a hypnotic, daunting and maddeningly fabulous closer to the album, transcendental in aim, you certainly imagine travel forward into the unknown listening in. Jim Thirlwell contributed again.

Balance was involved in a number of other bands at the time leaving his indisputable imprint on them, Psychic TV, 23 Skidoo, Current 93, Death In June, and the incredibly difficult Nurse With Wound, uneasy listening if ever there was. The section labelled 'experimental' in the record stores was 75 percent John Balance-involvement come the end of the 1980s. Derek Jarman invited Coil to compose the soundtrack to The Angelic Conversation (1995) but already my mind was racing to what they might be able to contribute to a horror feature film. Clive Barker latched onto them immediately and had them compose a score for his directorial debut Hellraiser (1987). New World balked at the weirdness and commissioned a new score by Christopher Young, until then better known for simple electronic scores for Jeffrey Obrow horror films but also the experimental soundtrack for Sparky Greene's horror film The Oasis. The replacement score was orchestral and the film cannot be imagined without it now. The original Coil soundtrack was not to be wasted and was released by the band on Solar Lodge Records through Rough Trade as a ten-inch mini-album. Hellraiser, Box Themeand Main Title are the longer tracks on side one, Box Theme the ghost of a music box tinkle trickling in and out of a nervous jangle of irregular layers of half-tune. Main Title is imposing and ominous, a glorious dark, powerful slow march, crawling up the walls, surrounding the listener and closing in on him. Eleven shorter tracks make up the B-side, Cosmetic 1 and Cosmetic 2 slight inversions of one another, the former querulous, the latter an ecstatic realisation.

Love's Secret Domain (1991) came next but felt like an only slightly cleverer annexe to the trance music of the day. John (later re-branding himself Jhonn) Balance and Peter Christopher would continue to stay busy as Coil, and working with other artistes under a number of band guises including The Eskaton and Black Light Music. In 1996 they hit the news again briefly when Howard Shore put himself forward as a nominee for the Best Original Soundtrack for David Fincher's Se7en. The main title music was the fractious Coil mix of Nine Inch Nail's Animal, from the seven-track mini-album of mixes of a couple of years previously. Coil protested, Howard Shore had contributed only his usual drone, and Trent Reznor was relatively quiet but in agreement, it wasn't his music, it was Coil's, admitting that once you give it over for Coil to mix, it becomes something completely different and something very much Coil. Shore was not nominated.

In tribute to Jhonn on Radio Three's 'Mixing It' they played a track from the Black Antlers LP titled Sex And Sun Ra Part 1 ('Saturnalia') a bubbling, eddying, darkling loveliness that included the unfortunate rumble of: "Most accidents occur in the home.../ most accidents occur in the home." Born Geoffrey Burton in Mansfield, Nottinghamshire, Balance was diagnosed a schizophrenic in youth. He had a fascination for the occult, often reflected in his work, and his drink and drug problems came to a head at the close of the 1990s, or so it was thought. He had parted from Peter Christopher and was in a new relationship with the artist Ian Johnstone at the time of his death, the result of a fall from the first floor landing in his home, inevitably to be attributed to his drinking habit. John Balance was a music realm unrepeatable, a creative demon with the occult power to possess the listener mind and body through his music. How kind of him it was to let us go at the end of the track.