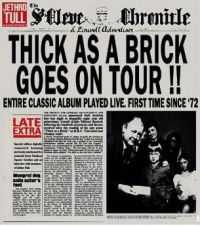 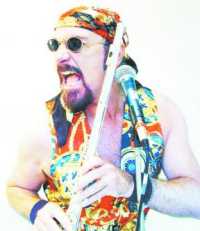 Being sentimental about Christmas, especially the Pagan-Christian hybrid we celebrate in northern Europe (such good songs: Heaven sings hallelujah/ Hallelujah the Earth replies), last December we went to Ian Anderson's concert at Manchester Cathedral in aid of the church roof. Despite having to sit behind a pillar, with a limited view, we had a great time, not least because of Anderson's decision to include some of the decidedly humanist songs from Aqualung among the set. The sight of Anderson's C of E liaison giving it with the heavy-metal head to Locomotive Breath will stay with me for some time.

Tull are touring Thick As A Brick, next year you know, I told my wife. "Oh, just get tickets," she said. Of course I had some small concern. Thick As A Brick (1972), for all the amusement of the vinyl's faux-newsprint wrapping, is not an easy ride. Anderson has stated that it is a parody of a concept album, a concept he had some resistance to, so why did he follow it up with A Passion Play which, the joys of Jeffrey Hammond-Hammond's The Hare Who Lost His Spectacles aside, is an even tougher ride?

However, reassured by the knowledge that the album's 45 minutes would not make up a full gig, I felt certain that the show would include some other old favourites. But, Anderson subsequently span down the years again, and released Thick As A Brick 2, taking the character of Gerald 'Little Milton' Bostock, the supposed writer of the long poem Thick As A Brick, and imagined what paths his life and career might have taken subsequent to his brief moment of notoriety in the town of St Cleve in 1972. Confused? You ought to be.

With some suitably contemporary tracks playing to set the scene, actually King Crimson's 20th Century Schizoid Man, and tracks from Captain Beefheart's Trout Mask Replica, both from 1969, we watched as roadies in matching flat caps and khaki dustcoats pottered about the stage. I take it you've guessed that they're the band? I asked my wife. I wondered if we were in for a night of forced humour. The publicity had promised extra musicians, video, and comic interludes. My wife was worried about her tinnitus, she only found out that she had this when she realised that the noisy mill across the valley that kept her awake at night, had been closed and demolished for a year. I faced the evening with some trepidation.

We were treated to a video of a consultation with Gerald Milton's shrink Dr Maximilian Quad, when suddenly there was Anderson onstage, in the spot, strumming his acoustic and telling us he really didn't mind if we sat this one out. Helped on vocals by Ryan O'Donnell, and with a link via Skype (not really) to violinist Anna Phoebe, a situation set up by the concert apparently being interrupted by her mobile phone call. The rest of Ian Anderson's Jethro Tull for this tour was David Goodier on bass, John O'Hara on keyboards, Florian Opahle on guitars, and Scott Hammond on drums. Martin Barre seemingly too old and knackered to tour now, this line-up represents Anderson's touring band. I'm not sure when Jethro Tull officially became Ian Anderson's Jethro Tull, although that situation has existed for a very long time. I can remember an old music press article observing that line-ups may change but some bands will always be identified with their figurehead, Tull was one, Dave Brock's Hawkwind another, and I guess Black Sabbath, with Tony Iommi more so than with Ozzy.

But what about this gig..? Well the sound wasn't great; the music was good, the band was tight but the vocals suffered. It wasn't easy to hear the words, I hadn't bothered to refresh my memory with vinyl, but - arguably - why bother? Anderson himself has admitted this anti-concept was an exercise in deliberate lyrical obfuscation. There was a little break midway in the first set, which began with a mock weather report, depression in the north west, snowfall in Scotland with a lucky lady waking up to a good six inches; schoolboy stuff.

I'm sure this is recycled stuff as well. Ian Hunter in Diary Of A Rock 'n' Roll Star mentioned seeing Tull in the USA and watching a similar sketch. Hunter went to see Jethro Tull to view their support band, which happened to be Roxy Music. Hunter acknowledged that Roxy hadn't gone down too well with the fans who had obviously come to see Jethro Tull's progressive folk-rock, not art-school glam. Interestingly, in a recent BBC4 series about British rock's domination of America through the 1960s and 1970s, Ian Anderson remembered the tour and his support, suggesting that Roxy had blamed the headliners for their failure but that, in his opinion, with their make-up and stage personas the fault had lain with Roxy Music for "wanting it too much."

I think Ian Hunter had it closer; the crowd for a Jethro Tull concert was not going to appreciate Roxy Music's particular area of expertise. And Anderson's quirky choice of support over the years has tended to suggest a policy to emphasise his own band's particular talents. Does anyone else remember Richard Digance at Hammersmith Odeon in 1977? Thought not...

Following the brief weather report routine, Anderson waxed about his own advancing years and those of the audience, asking if anyone had signed up for a prostate examination that year. Admirable advice, but I felt old enough listening to the music without the false bonhomie of a shared cataloguing of glandular dysfunction. But no, a couple of men had to be hauled from the audience for a backstage 'examination' projected onto the video screen. Does Jagger do this at Stones' concerts?

The first half riffed, licked, fluted, time-changed, and drummed to its conclusion. For the final chorus Anderson observed that our wise men didn't know how it felt to be thick as a… before flinging his arms in the air for the audience to yell BRICK! And BRICK appeared on the video screen in bright red to be immediately replaced by Dave, from the prostate examination, telling us that we could get our commemorative tees in the foyer. Now call me old-fashioned, and I know how commercial rock music is these days, but I'd appreciate it if the closing bars of a song were allowed to fade away before being exhorted to shell out for a crappy t-shirt.

Before the second half got under way there was another little film, this time with Anderson, in the role of a retired military gent, a worthy of the fictional town of St Cleve, giving us a tour of the grounds of a substantial stately pile in that borough. I couldn't help wondering if this massive edifice was Anderson's own, acquired through an impressive back-catalogue of music, and what Dave could flog on the souvenir stand. Well, he deserves it. He lives in the UK, runs a fish-farm in Scotland, and presumably pays his taxes like the rest of us. But the film wasn't particularly funny, although when Anderson's on-screen persona pointed out the sign, 'beware cats crossing' (Anderson is a big cat-lover) on the driveway, a guy a few seats behind me exploded with mirth as if that was the funniest thing he ever did see. In fact, this concert was full of mysterious and disconnected yells and cries from the audience; I never know whether it is heckling or approval, but people do suddenly yelp things out at odd moments.

The songs in the second half were somewhat better than the long original concept piece. Now the band explored a variety of possible futures for the character of Gerald Bostock; money-man, soldier, lover. This part of the set featured the excellent A Change Of Horses, a highlight of the gig for me, where too often I had found myself brooding about something else. The concert finished, there was an outro to the band, Anderson launched a massive balloon into the audience and they left; no encore. Perhaps they were disappointed with us. I was rather disappointed with the night, but have no doubt that with a different set, something more familiar - anything up to the 1980s; I would have enjoyed it as a great night. So, I have to take a substantial amount of blame for my expectations. And my wife's tinnitus didn't trouble her.