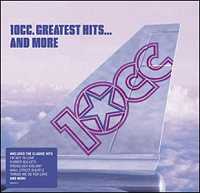 10cc are one of the bands that tend to fall between the cracks. Best known for I'm Not In Love and precious little else, they tend to be overlooked in favour of more successful art-pop artists such as Frank Zappa. This absence from popular culture hasn't been helped by the band's various line-up changes and phases, meaning that it has often proved difficult to follow their evolution, as they drop off the radar for years at a time before resurfacing.

Now, however, this compilation has brought together tracks from every period of 10cc, ranging from their earliest work to the songs offered for download from Kevin Godley's website last year. The end result is a fascinating, varied and at times frustrating mix.

The first CD in particular runs the gamut from some of the band's best work to some of its most banal. Donna is a superb, and very funny, 1950s' doo-wop parody whilst Rubber Bullets crackles with the sort of energy and nervous humour that would become part of the punk movement. On the same disc however, Life Is A Minestrone has aged very badly whilst Art For Art's Sake plays as the worst, self-righteous excesses of the time writ large.

Even after these though, there are some tracks that still impress. I'm Not In Love is that rarest thing, a ballad that is passionate, articulate and affecting whilst Cry, a Godley and Creme number is subtle and understated. Closing out the disc, Bridge To Your Heart is both a vintage piece of late 1980s- early 1990s' pop with its huge horns and echoing vocals and also, somehow, a truly joyous piece of pop music.

The second disc is where things get a little more complicated. Here, solo material from Godley and Creme, and Graham Gouldman (including, No Milk Today, the track he recorded for Herman's Hermits) sits next to tracks from the band as a whole. Again, this is a mixed bag with the epic Une Nuit A Paris a standout along with the again understated and pleading Don't Hang Up. The disc closes with Son Of Man, one of the Gouldman solo pieces that attempts to tie everything that's preceded it together and sees Gouldman musing on the formation of the band.

Greatest Hits... And More is a fantastic sampler of the many different phases of 10cc. Inevitably, some of the material hasn't aged well but what still comes across perfectly is the intelligence and eccentricity of the band members and the love they have for their work. If you're interested, there's never been a better sampler of that work than this.