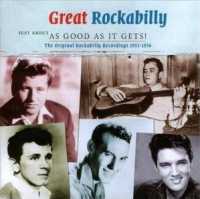 GREAT ROCKABILLY: JUST ABOUT AS GOOD AS IT GETS
The Original Rockabilly Recordings 1955-6

While the black inputs to rock 'n' roll have been widely documented - and That Ain't Nothing But Right, its white counterpart has arguably been unfairly neglected. Yet rock was always about the perfect synthesis, the sound of the great American cultural melting pot spinning at 78, then 45, and sometimes even 33.3 RPM. At precisely the same time that R&B was electrifying itself into its next evolutionary step-up, country music was busy adding a backbeat, to become rockabilly. "Rock it! - But don't ruin it" as Skeets McDonald cautions. But it was more than just a transition phase; it was a fully formed genre in its own right. As this double-CD set of 64 tracks more than proves. These were good ole boys from southern small-villes, high on jukebox dimes in honky-tonk diners, gas-guzzling Cadillac's with sci-fi fins, and acoustic slap-beat stand-up bass, hungry for the big time - and for "kittens in tight-blue jeans."

"All my friends are boppin' the blues, it must be goin' round" drawls Carl Perkins, "just a handful of nickels, and the jukebox will cure your ills." You can't blame it all on Elvis, although his two 'Sun'-label tracks here - Mystery Train and Baby Let's Play House, are searing primal detonations. If he'd never recorded anything else after leaving Sam Phillips egg-box Memphis studio these tracks alone would write him into the pantheon of 20th century greats. And undeniably his spectacular rise helped focus attentions and indicate commercial possibilities. But 'Sun' produced, not only the template, but also a wealth of other classic tracks. The problem with reviewing compilations is that they can reduce down to mere lists of favourite tracks. And sure, Carl Perkins' own Blue Suede Shoesand his Boppin' The Blues demonstrate his finely tuned antennae for the minutiae of teen-style. Then Johnny Cash does Get Rhythm - the original of the song expertly replicated in the Walk The Linebiopic, plus So Doggone Lonesome which remain more Cash than they are just about anything else. Even at this earliest stage of his career, with the full 'Sun' echo and pared-back instrumentation, he forms his own unmistakeable oeuvre.

But when you watch Elvis in his second big-screen venture - Loving You, as an awkward hillbilly truck driver fumbling his way towards the big-time by singing with a cowboy band, or you see Joaquin Phoenix portraying Cash on amphetamine-fuelled hick C&W tours, they catch exactly this moment of popular music caught on the first uncertain tremors of reinventing itself. And their seismic echoes have yet to subside. A young Roy Orbison rocks out with Ooby Dooby, Go Go Go and You're My Baby which will come as a visceral shock to those who only know the Big 'O' as a heartbroken balladeer. It's evidently not the natural environment for his strained vocal talents, but he acquits himself with enviable energy. But there's more from 'Sun' to "drive the cool cats wild" than just these familiar names, Warren Smith with his tribal Ubangi Stomp, or his vivid Rock 'n' Roll Ruby who "took her high-heels off and rolled her stockings down" then "put a quarter in the jukebox to get a little beat." Or Billy Lee Riley, with his first-ever single Rock With Me Baby - not his amazing UFO drive-in stormer Flying Saucer Rock 'n' Roll. They remain massive stars in insider rock 'n' roll circles if scarcely known outside of them.

Meanwhile, turned down by Sam Phillips and moving away from Memphis, Johnny Burnette was destined to achieve teen-scene million-sellers with fan-mag favourites Dreamin' and You're Sixteenin 1960, but with The Rock 'n' Roll Trio he contributes Train Kept A' Rollin' which was for decades a kind of collectors' holy grail of rockabilly, and even scored a Yardbirds cover version in the Blow-Upmovie, plus Tear It Up - an original Coral version of the single valued at �100 by Record Collector: 100 Greatest Rock 'n' Roll Records list. Guaranteed to get the 'real gone cats' jitterbugging. Gene Vincent's gum-chewing hoodlum Be-Bop-A-Lula sequence in The Girl Can't Help It is one of the most iconic images of the era, and loses nothing in its transition to CD. While Buddy Holly'sMidnight Shift sneaks a devious cheating night-time-is-the-right-time subtext into the surrounding clear-eyed pop moon-dreams. Rockabilly is essentially small-label small line-up stuff recorded on crude studio technology. No fancy orchestrations or production kidology. Tracks seldom stay around longer than two minutes, and frequently less.

But within that definition, there's a wide diversity of delivery. From the whispered intimacy of Sanford Clark's fragile hit single The Fool, which is the closest it gets to mainstream pop (US #7 in August 1956, an early Lee Hazlewood production with Al Casey on guitar), to where it leaks away into the twangy quaintness of western swing (Roy Halls version of Fats Domino's All By Myself, and Malcolm Yelvington's amusing sex-war Yakety Yak). Marvin Rainwater, a mighty Cherokee, never dealt in less than stunning rock 'n' roll. Webb Pierce's Teenage Boogie is where Marc Bolan stole his I Love To Boogie from. Don Woody's Barking Up The Wrong Tree is a pure ludicrous laugh-out-loud joy. And moving closer into those black crossover areas El Paso country star Marty Robbins makes a half decent fist of Chuck Berry's motorvating Maybelline. And although Ray Harris might have been popping the Little Richard pills (on his Come On Little Mama), he falls a few tabs short of achieving full totally convincing Penniman-hood. But in fairness, no one ever could. And That Ain't Nothing But Right - as the Mac Davis song title tells it.