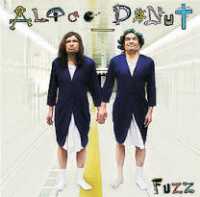 First thing you need to know is this album rocks. Think Pixies meet Dead Kennedys, maybe with a hint of Zappa. Alice Donut have been around on and off for 20 years, producing many a quirky twisted punk pop album. This is one of their best in years.

Lyrically, it is occasionally angry, often moving, always just a bit skew-wiff, and quite often very funny indeed. Just one example: "Tied umbilically to their headphones in a state of sonic ecstacy / I find these Pod People creepy, depressing and yet inane..." And that's just the first line of the album.

Musically, it all starts with a bang with a heavier than usual Madonna's Bombing Sarajevo, gets all cheerful with Little Monkey, and toddles on its merry way doing all the things we know and love the Donut for. The music veers from the anthemic with Days Away (you will not be able to get this one out of your head) to the decidedly odd, via The Better Me which would not have been out of place on any of the early Pixies albums.

There's a couple of pure punk noise tracks, but tastefully and inventively done. Best played loud. There's the lovely Kcick Again which is, for me, the highlight of the album. A mature Donut sound? Who'd have thought it?

Carolina sounds surprisingly like a new wave re-write of Dear Prudence. To top it all The Puny & Revolting Men Of Advertising Gaze At Their Reflections And Smile (they've got a way with titles...) is the perfect closing track, wraps things up nicely. It's good to hear some banjo and trombone in there as well.

If you're already familiar with these people, you'll probably be buying this anyway. If not, this is a good place to start. Can't wait for the next one.