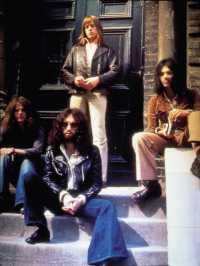 Free came into existence in the late 1960s and had built up quite a reputation as a live band before they really hit the big-time with the song All Right Now in 1970. This was the highlight of their career, although musically they were responsible for many a fine moment. After this, they went into a decline, split, reformed, and eventually split again, citing the usual reasons of personal differences, which were undoubtedly not helped by guitarist (the late) Paul Kosoff's increasing drug dependency.

But, in 1970, the year from which almost all the footage on this double DVD set originates, all of that was in the future, and the band were firing on all cylinders. Apparently, not much film of the band has survived, and most, if not all that remains is gathered here. So what do we get to see?

First, there are three songs from a German television show, followed by another five from a British one (the seated audience is worth a giggle - how times change!). The sound on both is excellent, the picture is nice and sharp, although be ready for the odd early 1970s' special effect to leap out and singe your retinas. These are followed by a collection of videos, which are of more variable quality. One of them appears to have been made to accompany a 1980s' re-release of Wishing Well, and should be avoided at all costs.

The second disc concentrates on their Isle of Wight performance. It features audio for the entire set, but film only exists for three of the songs. Again the sound is splendid, but it is a bit odd waiting for the film come in (the rest of the time you get still images). The footage that does exist is taken from the Isle of Wight film, complete with split-screens and suchlike. After the set, every scrap of footage from each camera angle on the three lucky songs is displayed. For very, very, very, dedicated fans only.

The songs are pretty much all from their first two albums, (All Right Now, four versions in all!), Ride On Pony, Mr Big, The Hunter, etc) and the performances are all pretty damn good. Although not earth-shattering, it's a nice little addition to any collection of Free material, but a casual fan would be much better off with a 'best of' CD.