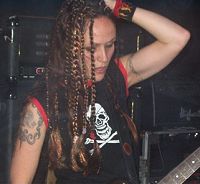 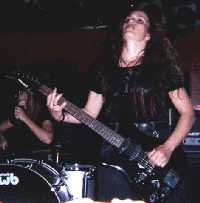 From The Well Of Riffs
FLAVIA CANEL

Flavia Canel was the former guitarist for the now defunct Swedish metal-band, Drain STH. After the subsequent break-up, she had relocated from Stockholm, Sweden to New York City, for a time, but has since returned to Sweden and is refocusing on her career and starting a new band. The following is a question and answer session with her.

Tell us about your new project? When can fans expect to hear some new music?

FC: I'm currently working with my new band members writing songs and we hope that we can start doing shows sometime this year. The music is heavy but melodic.

How did you like New York City? What are the major differences that you found between NYC and Stockholm?

FC: I love and I hate NYC! I love that people talk to you there, but the traffic sucks. In Sweden, people tend to not want to talk to you, unless they know you. It's the 'don't talk to strangers' adage. But don't get me wrong; I love Stockholm as well.

I heard you used to race motorcycles in Europe for a couple of years. Tell us about that? Did you ever have a major accident? How many races did you win?

FC: Yeah, I used to race in Sweden, both Road Racing and Drag Racing. I am somewhat of an adrenaline junkie; so racing was a great way of getting a fix. I did very well racing, but then I had an accident in traffic on my Suzuki GSX-R 750 and I beat myself up pretty bad. It took like four years of recovery and lots of surgery.

What other artistic endeavours do you pursue, if any?

FC: I have a big urge to express my self with art, no matter what form. So, if I'm not playing music I like to draw or paint or make other things, as long as I'm creating, I'm happy.

You were born in Montevideo, Uruguay, grew up in Sweden, how many languages do you speak?

What advice would you give to any aspiring women musicians fighting the odds to make it in the music industry?

FC: Don't sell your merchandise rights away. Seriously! However, I don't have any specific advice for women musicians. It doesn't really matter what sex you are. You have to work hard and be on top of your game. Go over the contracts with a lawyer before you sign anything. Don't be afraid to ask many questions. Don't let anyone tell you what to do. Because everybody in the business just wants to make money off of you!

What guitarist's work inspired you the most? Who are some of your other favourite guitarists?

FC: When I started playing guitar Lita Ford, from the Runaways, was a big inspiration to me. I've been through a lot of guitar players since, from Angus Young, Tony Iommi, Joe Satriani to such guitarists as Dimebag Darrell of Pantera.

What current bands do you like, if any? Did you ever listen to Celtic Frost? Do you listen to any of the bands from the Nordic folk music scene, which has seen a resurgence in recent years?

FC: I don't really have any favourite bands. I don't have much time to listen to CDs. When I have the time, I like to listen to the radio. But I like a little bit of everything as long as it's good. No, I haven't been listening to Nordic folk music.

FC: When we played in Stockholm in December 2001 with Black Sabbath. That show was unbelievable. It's your hometown and everybody is there. It was one big party!! I can't think of a city that I don't like to perform in. It all depends on the audience and the show. If it's a good show it doesn't matter where you are.

I think my favourite Drain song and riff was for Crack The Liar's Smile, from Horror Wrestlingfollowed closely by Black from Freaks Of Nature. What was your favourite Drain STH song?

FC: I have a lot of favourite songs, Leech, Crave, Unreal, I Wish, among many others.

Describe your creative process. Is it something that just flows from you or is it more of a start-and-stop kind of procedure?

While I am saddened by the fact that Drain STH is no more, I sincerely hope that all the projects that come from Drain's demise prove successful. What does the future hold for you (hopefully)?

FC: Hopefully I'll be plenty busy with my new band, Blowsight. We like to tour as much as possible. I can't wait to be out again to meet all the fans. Blowsight was formed in 2003 in Stockholm, Sweden and includes myself on bass, lead singer Niklas Fagerstrï¿½m, ex-Selph guitarist Serban Carapancea and drummer Fabien Perreau.

I wish you the best of luck in the future.