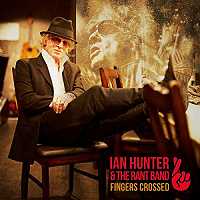 Many rock stars grow old disgracefully, others never grow up or mature at all, and then there's a rare few that simply become immortal. Ian Hunter's follow-up to When I'm President (2012) this album offers 10 tracks of excellent sounds with a timeless appeal from an enduring British luminary. Despite being in his mid-seventies, Hunter's obviously not content with resting on his laurels as a Golden Age pioneer with 1970s' band Mott the Hoople. His peerless mastery of rock is clearly an artistic virtuosity, and diversity (not merely a random assortment of tunes), all presented with a sometimes hyper-charged brio that belies his advancing years.

For listeners who might be out of synch or touch with Hunter's varied concerns, "you won't know what hit you" in boisterous opener, That's When The Trouble Starts. The second track, Dandy, is an affectionate tribute to the late David Bowie. Ghosts essays Hunter's emotive reactions to visiting a legendary studio in Memphis. Balladish title-song Fingers Crossed is about the hard life of a press-ganged sailor and it's enlivened by an electrifying guitar solo. A home-sweet-home yarn, White House adopts a wholly common refrain ("you are the only one for me") but with a heartfelt manner.

Cheerfully upbeat, Bow Street Runners tells of London's first policemen in a 'gaslight' era where criminals roamed otherwise unchecked on the capital city's streets. Hunter sings of 'chasing scallywags' and chants "keeping the peace" with tremendous inspirational force. Based upon ancient Greek mythology, Morpheusswitches things into a spooky mood with enchanting piano and twangy chords, and shades of Blue Oyster Cult. That song of escapism is followed by one of recognition and contra-whimsicality, as crowd-pleaser Stranded In Reality boasts a great sing-along chorus exploding from an instantly catchy tune.

American author Thomas Wolfe wrote that "you can't go home again", and the jangly guitars of Hunter's You Can't Live In The Past repeats this message with a modernist relevance. With its honky-tonk style, Long Time makes an engaging closer, seemingly about lasting friendships, and its most telling line, "old enough to know better, young enough to join in," almost sums up the no-nonsense honesty of genre veteran Hunter's contribution to 21st century rock music. A filmed concert on DVD is long overdue!

With solid quality entertainment, throughout, here the melancholy of wisdom and remembering is balanced by unshakable hopes, truth emerging from dreams, and careful wishes. This is music created in a classic style that makes genius look effortless, with the furthest reach of a radar-scan caress, but the sharper intimacy of a toothpick. Some old rockers don't die, or fade away. The very best of them, like Ian Hunter, live forever.