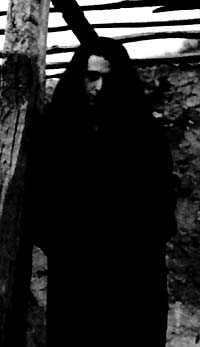 Maestro Andrea Tilenni, the single member and driving force of the enigma known as Fear Of Eternity, is a man of few words. I recently sat down with him in an attempt to gain some insight into this one-man band's latest release, Spirit Of Sorrow. Tilenni is far from verbose, but what he does say speaks volumes about the extraordinary music played mostly through a simple keyboard setup.

How would you describe your sound to someone who has never heard it before?

AT: I would say that it's very personalised and depressive 'melodramatic black metal.'

Toward The Castle at times felt like a soundtrack to a movie. Was this deliberate on your part?

AT: Absolutely not. It just came out the way it is.

Spirit Of Sorrow seems to embrace solitude and pain. What does solitude mean to you? Does it help you to craft such music?

AT: Solitude means incomprehension; at the same time, it is the inspiration and the philosophy of my music.

The guitars are minimal on Spirit Of Sorrow. Do you plan to give them a more prominent role in future recordings or will you continue to explore the keyboard?

AT: In my songs I try to maintain each instrument as an accompaniment to the keyboard, which has the main role, and I think [it'll] go on like that.

When you compose, do you take into consideration the audience or do you simply write from the soul and hope kindred souls will migrate to your sound?

AT: I don't compose for listeners - neither for commercial inclination - but for myself. I feel emotions and I put it in my music as simply as people write about their own experiences in a diary.

So... how does it feel when you connect with a listener?

AT: It's great to hear that people can feel emotions and admire my music.

Do you plan to take 'Fear Of Eternity' on the road or will it remain a studio project?

AT: I don't know if it would be possible because my music - it's very intimate, and with other persons it would become a mixture of different intentions. Anyway, that's not essential because the main point is to somehow transmit the message.

What inspires your lyrics?

AT: I don't have any lyrics in my songs, but [rather] the pure expression of the soul that comes out through the voice.

AT: Thank you very much for the interview, and to [those] whom support me and my project and moreover believe in humility.