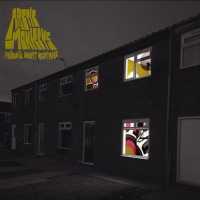 review by James A. Stewart

After the spectacular commercial and critical success of their record-breaking, award-laden debut album, Whatever People Say I Am. That's What I'm Not, many observers expected Arctic Monkeys to suffer from second album syndrome. Wrong. Favourite Worst Nightmare is ridden with lyrics carrying the same caustic social observations as its predecessor, but an increased air of musical maturity is apparent throughout. The album gets off to a blistering start with the first single Brianstorm, and culminates with the haunting 505. In between the songs rise and fall in pace, like the Yorkshire Dales of the band's home county.

Teddy Picker, foot-tapping riff throughout, is one of those songs that you hum, and you hum, and you hum. However, it is edged-out in the catchy tune stakes by the penultimate track, Old Yellow Bricks which is in some small way a homage to The Wizard Of Oz - and as Alex Turner observes in the last line, "Dorothy was right though."

The wailing and snarling of Brianstorm gives way to more sedately paced countenance of Do Me A Favour and Only Ones Who Know. Beneath the nice, chorus-loaded guitars of said tracks are some of the lyrical highlights on the album, with a call to "break my nose" on Do Me A Favour.

The meteoric rise of the last few years has obviously not blunted the band's creative edge and desire to remain true to their indie roots. Bands such as Razorlight and The Zutons took the easy route to commercial acceptance on their respective second releases, but Arctic Monkeys released a radio-unfriendly 162 BPM first single. The result..? Headline slots at arguably the two biggest festivals in the UK, Glastonbury and T-in-the-Park. There is a lot to be said for maintaining that Northern cynicism. They make no apologies for singing in their Yorkshire accents, for social synopses being the foundations of their lyric content, nor for not wanting to look, act or be like the clichéd rock stars of the 21st century. And why should they?

With their releases to date it is not beyond the realms of possibility that Arctic Monkeys could be Britain's most influential band since the Oasis beat-pop combo. Is album two better than album one? I don't know. Given the success and acclaim for Whatever People Say I Am. That's What I'm Not that is compliment enough. Arctic Monkeys are not ephemeral, they are here to stay. They are growing up. They are still writing killer riffs. Rock on.