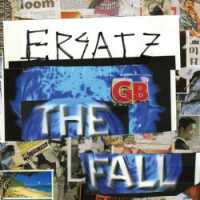 The Fall's most recent Edinburgh gig was not the most successful one in their long history. They started well enough but Mark E. Smith walked
off after a few numbers. The audience were not pleased; this was the second gig in a row where he had done this to them. Keyboard player Elena Poulou
apologised for him and said that he had sore feet, and the band soldiered bravely on without him. Eventually MES was persuaded to reappear for one
final song, an excellent Mr Pharmacist. MES used to live in Edinburgh for a couple of years and wrote Edinburgh Man, a beautiful, wistful
song, about the experience. Maybe he suffers some sort of psychic pain associated with the place. Or maybe he just nips out to his regular for a pint.

Most bands have a golden decade after they release their first record to achieve all that they can manage artistically and after that it's all downhill
and repetition. Sonic Youth are one of the few exceptions, although the recent divorce in the ranks may finally doom them as a unit. The other exception
is The Fall. Many could argue that they are merely Smith's backing band and therefore do not count but, despite a high turnover of members, this is
unquestionably a group. The forceful one may be the domineering personality in there but the fact that they can function without him and are still
identifiably The Fall proves the case beyond doubt.

Overall, Ersatz GB is a more intense, less immediate, experience than last year's excellent Your Future Our Clutter. The very fact that
they're producing albums like this now would doubtless have come as a shock to any of their fans of 20 years ago. Back then it looked as if they were
heading off into a civilised middle-age sound, albeit a sound of the highest quality. Now they're slicing the air with fast waves of noise and hypnotic
droning riffs.

Keiron Melling's drums and Dave Spurr's bass kick off Cosmos 7 (and this album) with an exhilarating turn of speed. It's a promise that doesn't
disappoint when the others jump in and deliver an excellent slab of rock. This is a band that's as tight as a gnat's arse; it's their third album
as a unit which makes them a relatively stable line-up for The Fall. Taking Off slows the pace (but would still be classed as up-tempo on most
other albums) and is a more reflective piece.

Nate Will Not Return drives on, with guitarist Pete Greenway sounding as if he's got the sheet music for the Stooges' TV Eye upside
down. Kazoos, bongos and fiddles have all featured in the band's past, but one of the strangest instruments must be Smith's dentures which feature
here and on a couple of other songs. The air whistling through them makes for a surprisingly melancholic sound which balances the singer's throaty
growl but, if you don't know what I'm talking about, please check it out before reporting me to 'pseuds corner'. The lyrics are almost a
stream-of-consciousness rhyming game as MES builds the song on spitting out variations on Nate while outlining the plot of American teen drama
Gossip Girl.

Mask Search is one of The Fall's fierce, swinging rockabilly numbers which takes a punch at Snow Patrol amongst other things. Greenway,
taking its title from the guitarist's name, is one of Smith's meandering autobiographical tales which starts when he sees someone who looks just like
him on a video on a Danish music channel. It's unpleasantly hilarious.

Happi Song sees Elena on lead vocals for a Nicoesque number (this is one band who could always tell their Lou Reed from their Doug Yule) that
sounds as if it could comfortably fit on Chelsea Girl. Elena sounds like a little girl when compared to Nico, though. Hell, even MES sounds
like a little girl compared to Nico if you pause to think about it. Again, there are hilarious lyrics. Elena wishes that others could understand
what she (and we) knows, just as an inarticulate MES growl is turned up briefly behind her.

MES promised us that this would be a Greek heavy metal album and of course Elena is Greek; maybe he was referring to the previous song. Who can tell?
However, Monocard sounds like the daddy of all British heavy metal. It has a slow, thudding Black Sabbath riff which apparently the band came
up with while rehearsing independently of the singer. And what does MES do with it? He puts down some lyrics about his inability to get to grips with
modern public transport. Laptop Dog is the lead single and therefore the worst track on the album. It's a rock 'n' roll tradition.

The album finishes strongly. I've Seen Them Come has about three different time signatures at the start and weaves them into a hypnotic
riff-driven piece of intensity. It's Greenway at his finest. Age Of Chang starts with a very lo-fi demo and then layers the studio recording
over the top to make a perfect fit. Like I said, this is one hell of a band.

The title for this album probably comes from Philip K. Dick, one of Smith's favourite authors. PKD was always introducing stuff like ersatz coffee
into his novels to symbolise a society that no longer contained anything of real worth or quality. Maybe a bit of Len Deighton's SS-GB crept
in there as well. But we've still got The Fall.

Recent albums from The Fall have sometimes had a few changes made to them before hitting the shops. Country On The Click was famously entirely
re-worked and re-recorded after being leaked on the Internet, while Your Future Our Clutter merely had the words in the title moved around.

With Ersatz GB it is the cover that has been altered. The cover you will see still shows a bit of newspaper collage but that is underneath
a brilliant blue cut-up of something else. The original version was a dead ringer for Sham 69's That's Life; not an association anyone would
wish on their group; or their worst enemy.