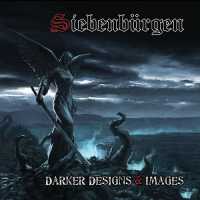 Hailing from Sweden, Siebenbürgen (an old European word for 'Transylvania') has built a reputation based on the band's fascination with vampires and a catchy, darkwave approach to creating its own unique brand of gothic/ black metal. With Darker Designs & Images, Siebenburgen continues to move away from vampiric themes, on this outing exploring demonology and other facets of evil.

Drummer Anders Rosdahl brings to the band its connection to black metal, his double-kicks fast and thick and his work on the kit covering a mix of high and low crashes and bashes. Guitarists Marcus Ehlin and Richard Bryngelsson tap into the rhythms of darkwave and NWOBHM (noticeable on tracks such as As Legion Rise and A Crimson Coronation), their riffs controlled and catchy, their hooks designed to counter each other, and their solos wailing and screeching their way through an onslaught of counter-rhythms. Bassist Nicklas Sandin works alongside the guitarists, his thumps designed to bolster the riffs.

Handling the vocals are Marcus Ehlin and Erika Roos. Marcus' vocal approach taps into the raspy qualities of black metal and the mournful style favoured by gothic metal. His mix works perfectly, his cadence clear while his pitch is idyllically demonic and thick. Like most female vocalists, Erika's high-pitched, operatic style serves as an antithesis for the male vocals. Erika has a dynamic range - there's no doubt she could make furry creatures howl when she hits high notes designed to resonate in heaven.

Lyrically, Siebenbüurgen crafts a loose concept album that deals with the resurrection of an ancient war demon known as Nozterra. Like the tales of vampires in the fictional world of Grimjaur on previous efforts, the chronicles of Nozterra are filled with startling images; intense emotions such as anger, fear, and lust; and a melding of the natural and the supernatural.

Fans of Cradle of Filth, Theatre Des Vampires, and even The Electric Hellfire Club will find much to relish on Siebenbüurgen's Darker Designs & Images. From the luscious instrumentals that bookend the CD to stellar tracks such as Rebellion, Skuggor, and Remnants Of Ruin, this CD will have you mesmerised. Rise up and embrace the time of Samhain: Siebenbüurgen knows the way. All we need do is follow.