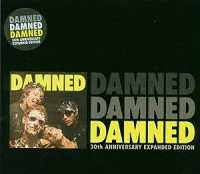 This boxset is made up of three CDs. The first is the original album and the second is plundered from last year's Play It At Your Sister boxset and contains demos, non-album cuts from the first three singles, and a Radio One 'In Concert' gig. The third disc is previously unreleased and is an audience recording of the band's first gig. We'll take them in the order that they're presented.

Damned Damned Damned was the first British punk album. All that most people knew about punk at that time was that punks couldn't play their instruments. Given the astonishing musicianship on display here, some rationalised that this could only be because the backing music was recorded and then sped up before the vocals were added. The live releases from then blow this theory clean out of the water, not to mention the John Peel sessions. Not that this is a polished production. Nick Lowe wasn't known as 'Basher' for nothing and he's managed to capture a spontaneous feel in the eight-track Pathway Studio. The Damned were also responsible for the first British punk single, the thunderous New Rose, which some wag once pointed out owes a little to the first movement of Beethoven's 5th Symphony.

Their second single, Neat Neat Neat, borrows its bass riff from Eddie Cochran, and is one of the best songs ever written. It's also one of those songs that's impossible to screw up and it has allowed the band (whoever happens to be in it at the time) a lot of room to explore on stage over the decades. The whole album is packed with gems. Guitarist Brian James penned 10 of the 12 tracks, some over the space of several years with his previous bands. Fish, for example, dates from his London SS days. Fan Club drips with venom, and the slow build-up of Feel The Pain sends chills down the spine. James' razor guitar and Rat Scabies' ferocious drumming are two of the main strengths after the songs. Born To Kill, So Messed Up, and 1 0f The 2 are particularly perfect punk joys and still sound fresh after all these years. The shortest track is the Scabies-penned Stab Yor Back - less than a minute of machine-gun brutality and chants. The album finishes with a cover of The Stooges' 1970, here called I Feel Alright which riffs along at a fair rate of knots before collapsing in an L.A. Blues manner.

Disc two contains their earliest recordings, three Matt Dangerfield-produced demos from June 1976 of songs that later turned up on the album. The quality is not great, but they seem to sound cleaner than the versions that surfaced on the Play It At Your Sister set. The band sounds fully formed even at that stage. Also on here is the live recording for Radio One from May 1977. A band called Nuts were supposed to appear but got stuck on the motorway, and The Damned jumped in at the last moment. They were halfway through their second British tour (third, if one counts the Anarchy tour), and were tight as anything; a fast, electrifying performance.

Then there are the first two John Peel sessions, the slightly ragged November 1976 one and the stunner from May 1976. Three of the four tracks on the later must be regarded the definitive versions of the songs. Then there's a couple of B-sides, one a cover of The Beatles' Help and another that is called Singalongascabies and is the backing track for Stab Yor Back before the vocals and guitar dubs went on. Their third single is also on here. After Nick Lowe, the band decided to try out 1960s' legend Shel Talmy. Unfortunately, Talmy was now nearly blind and had great difficulty in operating a mixing desk. The Damned managed to squeeze the Stretcher Case Baby single out of him, and it's included here. Unfortunately it's included here exactly as it was released. The B-side, Sick Of Being Sick, had only the guide vocals on it, so the record company stuck the version from the Peel session on instead, meaning we have that version twice, and only Stretcher Case Baby from the Talmy session. It's still a great single, and it's a puzzle as to why it wasn't properly released. The band booked the Roundhouse for four nights for their first anniversary bash, intending to give everyone who turned up a copy of the single, but they only managed two nights after falling out with the management. The remaining singles were given away in an NME competition. It was an omen. This version of the band began to fall apart pretty quickly afterwards.

Disc three is an unreleased bootleg of their first gig, supporting the Sex Pistols at the 100 Club on the 6th July 1976. It's in lo-fi mono, but it's better quality than the tape of their sixth gig (previously thought to be their earliest live recording) that was released with Play It At Your Sister. They sound impressive. It's not the blistering assault that was captured at the 'In Concert' gig, but it's not far from it. It's weird hearing the intro to New Rose being played on a cowbell (the cowbell also featured on the demos, but presumably went missing soon after this), but everything sounds pretty much fully formed. There's an early version of Alone, which turned up on their second album, and a cover of The Who's Circles that was dropped from their sets very quickly. The Who must be the great, unacknowledged influence on British punk, as The Sex Pistols were covering Substitute at this time as well. Oh, and for all you Pretenders completists - apparently that is Chrissie Hynde who can be heard in the audience.

Many people will already have a copy of this album. Even at �10, is it worth buying again for the extras? Oh yes.