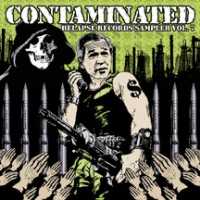 Maybe you've heard bits and pieces of extreme music but don't know where to start. After all, there are so many genres of extreme music, from the breakneck groove of grindcore and the thick guitar chords of doom metal to the blistering technicality of death metal and the bizarre fusion of hardcore with other facets of heavy metal that is known as 'metalcore'. To get a dose of these and other styles, Relapse Records has released a number of samplers that feature the record label's top bands. Contaminated is the seventh such release, and like the others, it is a mixed bag of brutality. Let's have a listen, shall we?

Blood And Thunder by Mastadon: this metalcore outfit combines the ferocity of death metal, the heaviness of doom metal, and hardcore to create a dense, groovy, and intense sound. This song should impress most listeners.

Devilution by High On Fire: the heaviness once found in the mighty Sleep is evident on this track, which features Matt Pike on guitar. The pace is a little faster, but the stoner metal vibe is alive and well. A solid entry for those into faster paced stoner mayhem.

Setting Fire To Sleeping Giants by The Dillinger Escape Plan: get ready for shifting time signatures, complex arrangements, and a straight ahead vibe sure to get your mojo moving. For this cut, the band taps into psychedelic grooves to create an intense and very cool composition.

Lashed To The Slave Stick by Nile: this track oozes the searing sound of American death metal. Expect thundering percussive bursts, technical and wailing guitars, and guttural vocals. The pace is fast, the intensity so high it will shake your house's foundation, and the end result is inevitable devastation.

Gravedancer by Pig Destroyer: one of the more experimental grindcore outfits around, Pig Destroyer bursts into flames, and turns in a song that is less than two minutes long. The drums are relentless, the guitars crunch and munch, and howling vocals screech through the speakers. It ain't pretty - it's classic grindcore.

Chinatown by Zeke: sounding much like Motorhead, this outfit sounds like heavy rock flavoured with Southern-fried rockabilly. Guitars rip like Ted Nugent, the bass thunders, and a gravel-throated vocalist goes for broke. Fans of Nashville Pussy will dig Zeke.

Thunder In The Night Forever by Planes Mistaken For Stars: a relative newcomer to the music scene, this band plays a kinder, gentler version of hardcore bordering on emo. Melody overrules intensity and the end result is okay. Personally, I think this is one of this compilation's weaker tracks, but fans of the genre will like what they hear.

Release by Unsane: a leading purveyor of noise-based rock, Unsane features screeching vocals, an upturned and hideous woofer, down-tuned guitars, and blasting drums. This track is a classic example of hardened hardcore that implodes under its own dissonance.

Leaves Of Three by Soilent Green: combining sludge metal with hardcore and even grindcore, this outfit moves from slow and dense interludes to breakneck surges that border on death metal. The schizoid approach will leave you exhausted but satisfied.

Dying Will Be The Death Of Me by Cephalic Carnage: another purveyor of grindcore, this band is also one of the more daring. This track is a hilarious send-up of teen angst and the mallrat/ Gothic culture. The music here is not too creative, and perhaps that's the rub.

Seven by Necrophagist: extremely technical, this band builds upon a style created by the likes of Carcass. The pace is relatively slow and the instrumentation is superb, with the bass resonating alongside the wailing guitars. This song is an excellent example of a genre - technical death metal - that very few dare to play in today's scene.

Orion by Zombi: I expected to hear death metal here, but I was in for a surprise. This band plays heavily synthesised music similar in style to Tangerine Dream, or better yet Goblin or John Carpenter. A strange instrumental that is perhaps too experimental for a collection such as Contaminated, but that nevertheless is certain to attract the ambient/ isolationist crowd.

Introduction and Time As Ideology by Buried Inside: both of these compositions are taken from the band's Chronoclast CD, which was written as a single 40-minute piece. This concept album deals with time from numerous perspectives, such as Time As Abjection and Time As Resistance. This type of progressive metal will appeal to fans of Fates Warning and maybe even Dream Theatre, although the music displayed on these tracks is much harsher.

Crystal Asunder by Burst: these Swedes combine math-core with melodic death metal, the so-called Gothenburg sound. Strangely aggressive but saturated with harmony, this song walks the razor's edge of both genres, with the musicians clearly having fun strolling along the taut wire.

Clarity Denied by Leng Tch'e: this Belgian monstrosity churns out quality grindcore indebted to death 'n' roll and even classic rock chords. Blast-beats, churning guitars, and dual vocals (one guttural while the other screeches) are on hand to make your ears bleed. This one is not for the weak of heart.

Stim Fit by Cretin: two ex-members of death metal/ grind outfit Exhume carry the grindcore torch proudly with Cretin, whose Stim Fit is even worse than the previous track. Noisy, filthy grindcore doesn't get any worse than this. Fans of the genre will wet their pants.

The Burner by Origin: this closing track is, naturally, from another grind outfit. This band embraces death metal and then places serious doses of methamphetamines on its twisted tongue. Grind bands don't get heavier and meaner than Origin.

Although predominantly made up of grind outfits, there's a little of everything to sample on Contaminated. Novice listeners will find this collection useful because it will enable them to select key albums, while veterans with cauliflower-shaped ears will relish having all these compositions on a singular CD.