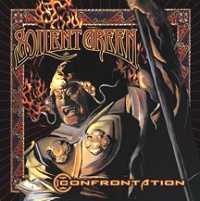 I have to admit I was not a fan of this New Orleans outfit's last effort, Deleted Symphony For The Beaten Down. But this new offering, Confrontation, has piqued my interest, principally because Soilent Green has brought back facets of stoner metal and mathcore into its grind/ death metal/ hardcore rap sheet. This modus operandi gives the band a variety of death grips that augment its array of punches and kicks, making Confrontation an excruciatingly good listen.

Sprinkled throughout the CD are little experimental pieces, such as the opener Scarlet Sunrise, Liquor And Cigarettes (which sounds like something you'd hear in a Las Vegas lounge), and Paper Cut (a bass solo whose finger plucks could possibly create such lacerations - man, that hurts!). These short pieces are weird but fun; they also serve to break up the variety of musical approaches showcased on this schizoid CD.

For example, there's the hybrid Leaves Of Three, with its stoner guitar and bass vibes mixed with grindcore percussive blasts and screaming vocals fused with death metal grunts. A Scream Trapped Underwater delves a little more into grindcore, but it also features some weird spoken word, some nice psychedelic riffs, and facets of traditional punk rock. And then there's 12 oz. Profit, a full-blown blaster that grinds its way to oblivion. For me, the standout tracks include Theory Of Pride In Tragedy (love those thick guitar riffs and the groovy structures) and Another Cheap Brand Of Luck(I was howling 'yee-haw' during the country & western opening and smashing my head against the wall during the rest). There's not a weak track on Confrontation - this is a very impressive accomplishment.

Despite some terrible vehicular accidents (two van accidents left various members seriously injured) and the tragic death of bassist Scott Williams in 2004 as a result of an apparent murder/ suicide incident, Soilent Green has emerged stronger than ever. Embracing heavy metal facets that have solidified and expanded its sound, this New Orleans outfit has created a masterpiece of extreme music. Hard to categorise? Yes. Hard to listen to? Hell no!