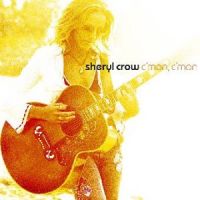 Four years after her last offering, this fantastic album of 15 songs is - indisputably - Ms Crow's finest work to date. Kicking off with a welcome instance of hero worship in Steve McQueen, scoring max points about celebrity lifestyles ("We got rock stars in The White House/ All our pop stars look like porn") while recognising and emphasising the plausible social values inherent in the cultural phenomonon of rebellious screen icons who might actively encourage individuality rather than slavish imitation. This particular fandom-relevant theme is continued in the sarcastic You're An Original ("Caught you in a pose/ That everybody knows"), which features Lenny Kravitz as guest singer.

Although the tempo slows down for the heartfelt Safe And Sound, with its excellent use of a string section, the band generates a tremendous head of steam for the song's soaring finale. Title track, C'mon C'mon, has more of Crow's beloved accordion, some excellent acoustic guitar work, and an irresistible sing-along chorus ("Break my heart again/ For old times sake"). The guest vocalist is none other than Steve Nicks. Over You boasts first class rhythm guitar work and is one of the catchiest tunes here. Lucky Kid's powerhouse guitars make it one of the most energetic tracks on the album, and Diamond Road is another one of those shrewd "Life is what happens while you're making plans" songs of spiritual philosophy, with a musical arrangement benefiting from cellos and violins.

It's Only Love is the song that Crow wrote and co-produced for Stevie Nicks (it's on Nicks' 2001 album Trouble In Shangri-La). Crow's own version is inevitably heavier and, in a quite pleasant surprise, features actress Gwyneth Paltrow as guest vocalist. The next track of note is Hole In My Pocket (penned with Peter Stroud, making a change from Crow's usual song writing partner Jeff Trott), and it's a magnificent pop classic in the making with clever use of drum loops and another appealing chorus. Crow hits the brakes for Weather Channel, a bittersweet ballad about recovery from a depressed state, and the legendary Emmylou Harris is the guest singer. However, Crow gamely takes the safety catch off again for I Want You, obviously concerned with the consuming passions of new love, and boosted to orbit via its lively horn section. Alongside the previously mentioned Steve McQueen, C'mon C'mon and Hole In My Pocket, this the most exciting and memorable track on the album.

Most half-decent rock stars can manage one or two great songs per album, but it's rare to find an artist capable of producing such high quality work on their 10th anniversary that there's not a naff cut to be found in their latest release, and at least half a dozen tracks which can sustain listeners' interest even after 50+ plays.