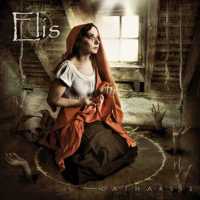 As some of you may know, Catharsis is the band's first full-length release without original founder and vocalist Sabine Dünser who, in 2006, collapsed after suffering a cerebral haemorrhage during a band rehearsal. She passed away on 9th July 2006, while at hospital.

Led by Sandra Schleret (Siegfried and Dreams of Sanity), the revitalised Elis present 11 stellar tracks that combine facets of power metal with gothic metal. Schleret has a voice more suited to power metal, thus there is a slight shift in sound. However, songs such as Warrior's Tale, and I Come Undone (catchy guitar riffs) reminded me of the core Elis sound, which was previously grounded in gothic metal. Bassist Tom Saxer's low-end vocals (both growled and gothic rock) counter Schleret's soaring melodies. Producer Alex Krull (Atrocity and Leaves' Eyes) may also have contributed to the vocals-at least I thought I heard his signature low-end scream on some of the songs.

The guitars of Pete Steit (Erben der Schopfung) and Christian Gruber are right out of power metal, their chops thick and heavy while their hooks are catchy and their leads screech with symphonic-styled fret work and rhythms inspired by the new wave of British heavy metal. The interplay between the guitarists is effective, as both exchange power rhythms while tackling short leads. The rhythm section of bassist Saxer and drummer Max Naescher leans toward lighter fare, with Naescher's percussion accentuating the melodic while Saxer's low notes are felt more than heard.

Fans of power metal and more mainstream gothic metal will relish every composition on Catharsis. The nods toward the roots of gothic rock will leave long-time fans of the genre smiling wryly, as Elis definitely acknowledge their point of origin. The digi-pack release of Catharsis contains alternate artwork, two bonus tracks, and a bonus DVD of the revamped band performing at the 2007 Metal Female Voices Fest in Wieze, Belgium.