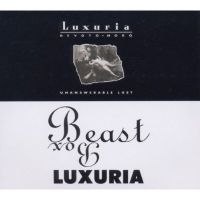 Cherry Red has re-issued everything that Luxuria ever released on Beggar's Banquet and then some. What we get in this triple disc set are two of the great lost albums from the last couple of decades of the 20th century and a previously unreleased recording of a gig from 1988. All the B-sides and single edits and mixes have been included which inevitably means that there are three or four versions of some of the songs scattered through this set, but at least they are all here because - let's face it - no one bought them first time around.

Howard Devoto had already created two of the greatest British bands with Buzzcocks and Magazine, and, in Noko, he'd discovered possibly the finest musician that he'd ever collaborated with. Noko (Norman Fisher-Jones) had previous form as the guitarist with the Pete Shelley group where he'd already have experienced some of Devoto's Ur-song Shelley collaborations from the days of Buzzcocks. Noko would shine in Luxuria.

Why did Luxuria fail? It certainly wasn't because of a lack in the quality of the music. Why did no one follow Devoto from Magazine? The last Magazine album Magic, Murder And The Weather had been a mess and the band disintegrated around it. Devoto then released a solo album, Jerky Versions Of The Dream, a couple of years later, which had its moments but was generally patchy and today stands as a monument to the fashionably thin 1980s production techniques.

The other members of Magazine had similarly failed to set the world alight, and people began to suspect that maybe the band was just one of those happy accidents where the parts only work when placed in a certain context. That's one reason. Another is that maybe Beggar's Banquet just didn't have the clout; the sales charts tend to measure marketing success as much as, if not more than, artistic value. Unlike previous Devoto projects, Luxuria didn't have a Peel session; something that would surely have drawn attention to the project. And then maybe they just ran out of time; they came along just as grunge prepared to sweep away all that was mannered and clean in rock music. It's ironic as Devoto had pioneered this wall of noise approach in the early days of punk while others were content merely to speed up Chuck Berry riffs.

The first album, Unanswerable Lust from 1988, is the most accessible. Opening track Redneck is at once upbeat and clear, signalling that the punk tendencies and the moodiness of Magazine have been put to rest. Obsessions and character flaws still decorate the lyrics, but there is a maturity about the lyrics that we weren't even aware had been missing before we came here. Public Highway, for instance, spoofs the faux-Americanisms of much rock music - the casual twist on 'baby' manages to mock lesser bands in one word - before building layers of instrumentation to become something magnificent. Mlle starts with a reading from Proust - in French - before going on to compare the characters in the song to those in the novel. It's delightfully arrogant. Sickly Thug And I is another work of brilliance about a strange relationship, suffused with oblique humour, but probably, for sheer majesty, nothing tops the song Luxuria.

Devoto continues his habit of lifting the album title from amongst the lyrics of the songs, so this is, in several ways, the title track. A sideways punch at religion, the song is structured like one of the magnificent creations on Joy Division's Closer album. Devoto was certainly no stranger to the ways of Joy Division's producer, Martin Hannett, having worked with him on two albums and an EP. Who, exactly, produces Luxuria isn't made clear but we can assume that the duo were more than competent enough to manage it for themselves. Also of note on the first disc are a couple of versions of Bob Dylan's She's Your Lover Now which first turned up as a B-side.

Beast Box from 1990 is Devoto's personal favourite of the two albums. One can't help but wonder if the title started out as a pun on 'beat box' but, regardless of that, Devoto has taken it and spun it into a complex analysis of myth and conspiracy that's both funny and poignant. The Beast Box Is Dreaming opens the album and tells of a mysterious, slightly sinister box that may or may not exist. No one knows exactly what is in it (Elvis' body?) or what it does, but it adds substance to our world. There is another track called simply Beast Box which relates some of the tales in the first song from a more personal and frightening perspective.

The rest of the album continues in this vein, if not with this theme, with songs that are structurally and lyrically more complex than before. This, for Devoto fans, is generally a good thing. Ticket, bizarrely, sounds like a twisted Syd Barrett pastiche. Smoking Mirror is here in both a vocal and an instrumental version, and remarkably each of them manages to touch different colours on the emotional spectrum and somehow come across as unrelated songs. I've Been Expecting You sounds like a gypsy tarantella. Animal In The Mirror is a wonderfully uplifting piece of music that belies its own lyrics. And so on...

The third disc has an excellent recording of a 1988 concert from Leicester. Naturally it leans heavily on the material from Unanswerable Lust, but there are also three Magazine songs: The Light Pours Out Of Me, Parade, and A Song From Under The Floorboards; probably the most Luxuriant of the Magazine songs. Significantly, there is nothing form Jerky Versions Of The Dream.

There are flaws, but only with the packaging. It would have been nice to have known who else played in Luxuria. Noko and Devoto may have been capable of creating most of the studio material between themselves, but there was an excellent band playing with them on the live material. There is also no list of exactly what was released 20 years ago, and in what format. These are minor things, maybe, but not entirely inconsequential.

After Luxuria split, Devoto left music while Noko went on to success with Apollo 440. This release has been timed to perfection; Magazine reformed two years ago and they have just released a superb new album, No Thyself. Since all of the original guitarists are either dead or unusable, they recruited Noko to fill the gap. He's arguably the best guitarist they've had yet. The current edition of Magazine therefore features between 20 and 60 percent of the original band (depending on which year you happen to be looking) while at the same time managing to present you with a full Luxuria revival. Paul Connolly states in his sleeve notes that Luxuria were a better band than Magazine and there are plenty of times, listening to this, when he's not wrong.