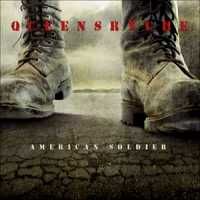 Once again, the chameleons that make up Queensryche have produced an album that will confuse many and touch a select few. The band acquired a strong fan-base with albums such as Empire and Operation: Mindcrime, but it seems many fans have been confused and put off by later albums such as Q2K and Tribe. American Soldier continues the trend, as many metal-heads have voiced their dislike of the music and the lyrical concepts. Sad, really, as Queensryche have always been a progressive metal band in the truest sense.

American Soldier is another slice taken from Geoff Tate's life. The concept began when Geoff had a conversation with his father, a veteran of World War II. Tate then went on to interview other veterans, recording some of their anecdotes and peppering them throughout his songs. The end result is a very personal album, one that focuses on the many effects of war on American servicemen and servicewomen. There's very little overt political content, as the emphasis remains on the emotional rollercoaster that these brave men and women ride before, during, and after each horrible skirmish. All sides of war are presented, revealing that there are no real answers when it comes to humanity's constant state of conflict.

Musically, Queensryche have moved away from traditional structures and commercial trappings, perhaps to ensure that the album remains a personal and cohesive affair. Guest guitarists include Damon Johnson and Kelly Gray. Guitarist Michael Wilton continues to evolve, his leads much stronger than on previous albums. Wilton's riffs are subtle but effective, particularly on tracks such as Unafraid, The Killer, and Man Down! A minor quibble is that the lyrical content takes precedence and that the music comes off as sounding as somewhat secondary on many of the songs. As always, Queensryche reveal a little about their influences, this time on the composition The Voice, which sounds a little like Led Zeppelin's Kashmir.

Tate is joined by vocalists Jason Ames, A.J. Fratto, Vincent Solano, and Emily Tate to create rich layers of standout choruses. A standout is Home Again, which details a young father's alienation from his daughter and his daughter's gut-wrenching assurance that she's waiting for him. Tate also uses the saxophone to good effect, such as on A Dead Man's Words and Middle Of Hell, both of which have jazz-like ambiance.

Yes, American Soldier lacks the immediacy of Operation: Mindcrime or the catchiness of Empire. However, it is an extremely moving and compelling album, one that given time may gain a following from those willing to give it a chance. Fans of conceptual, emotional, and progressive music should give this one a try.