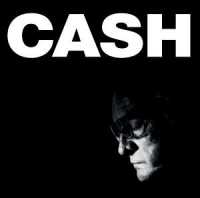 "And I heard, as it were, the noise of thunder:
One of the four beasts saying come and see.
And I saw, and behold, a white horse..."

These words led me to purchase and actually listen to my first ever country-western CD. Won over by the CD's stark, minimal approach and Cash's shaky baritone voice, I have not since been able to remove American IV: The Man Comes Around from my CD player.

Dominated by covers ranging from Nine Inch Nails' Hurt to The Eagles' Desperado, American IV: The Man Comes Around also constitutes Cash's final recording (he had presumably selected more covers for 'American V' before his passing). Cash infuses these covers with raw emotion, stripping away much of their rock and roll aesthetics and thus enabling the lyrics come to the forefront. Using Dylan-driven phrasing and overwhelming clarity with minimal instrumentation - acoustic guitar, a piano or organ at times - Cash lets the words wash over you like spring rain, and in most instances, a snow shower overcast by thick layers of melancholy clouds.

Cash's selection of these songs is impressive. Themes of death (Give My Love To Rose) and revival (We'll Meet Again), fear (I Hung My Head) and humour (Sam Hall), and sadness (I'm So Lonesome I Could Cry) and wry joy (Tear Stained Letter) are all here, all of which hint at Cash's own state of mind at the time. The delivery is pristine country-western, with most topics dealing with cowboys and outlaws. Thing is, even songs crafted by the likes of Sting and Trent Reznor are so dramatically redone that they are somehow converted to this genre, and as a result they are given new meaning and distinction.

Guests abound on this album. For example, Fiona Apple joins Cash on a duet for Simon and Garfunkel's Bridge Over Troubled Water, Billy Preston (Rolling Stones and Jackson 5) and John Fruscinate (Red Hot Chili Peppers) perform on Depeche Mode's Personal Jesus, and Don Henley (The Eagles) joins Cash on Desperado. The true standouts on this CD are the songs Cash penned himself. Of these three compositions, my personal favorite is the title track, which begins and closes with quotes from the bible's 'Revelations'. I first heard this composition on the 2004 remake of Dawn Of The Dead, and its haunting narrative and minimal delivery put me on the path toward purchasing the CD. The apocalyptic vision of this song is startling, particularly its details. Lines such as "Every body won't be treated quite the same" ... "The hairs on your arm will stand up at the terror in each sip" ... and "Voices calling and voices crying, some are born and some are dying" resonate with a gamut of emotions of someone facing their own end and perhaps a new beginning. If this is the quality of Cash's original material, I will definitely be seeking out more of it.

The other two tracks are also vintage Cash. Give My Love To Rose sounds like his final homage to his wife June Carter. It is a poignant tale of a man who finds a desolate soul dying next to the railroad tracks. And then there's Tear Stained Letter, a honky-tonk-driven tale delivered with sardonic wit and underlying joy.

The man in black definitely delivers with this CD. Superb storytelling, coupled with Cash's signature voice, make American IV: The Man Comes Around a good place for fans weaned on rock 'n' roll to experience Johnny Cash for the first time. Cash loved music, and it shows here. Walk the line with him.

"And I heard a voice in the midst of the four beasts.
And I looked and behold, a pale horse, and its name it said on him was Death.
And Hell followed with him."