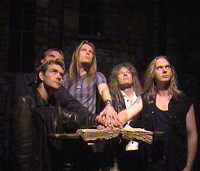 Made up of members from Helloween, Iron Saviour, and Ark, Masterplan generates a rousing type of European-driven power metal sure to enthral fans of this sound. Now, the principal problem with power metal is a lack of identity. There are so many bands saturating this style that often it is close to impossible to identify the performer. There are exceptions, of course - Kamelot, Rhapsody, and Domine come to mind - and now I add to this list Masterplan.

The Masterplan signature sound consists of a power metal foundation onto which are sprinkled doses of progressive metal and a dash of stadium-inspired rock 'n' roll. The end result is less orchestral and fantasy based but much more accessible and catchy. The band's centrepiece is vocalist Jorn Lande, whose voice is ideally suited for this genre. The man definitely has the pipes, but more importantly, he knows when to soar and when to hold back.

Guitarist Roland Grapow makes sure that rock 'n' roll remains a viable element of Masterplan's sound. Consequently, his guitar is at times harsh, at times soft, but always present. Drummer Uli Kusch has a knack for rollicking percussion, but he also knows how to punctuate the quieter moments, such as those found on I'm Not Afraid. The same is true for bassist Jan S. Eckert, who can be felt on tracks such as Wounds and the rousing ballad After This War. Giving the band its melodies and harmonies is keyboardist Axel Mackenrottn, who sticks mostly to the background.

Standout tracks include Headbanger's Ballroom (a mixture of Dream Evil and early Asia), Into The Arena (which sounds like something out of HammerFall), and the closer Black In The Burn (a 10-minute opus that will have you pumping your fist one minute and reaching for the air guitar the next).

Those of you craving a feast of melodic, driving, and majestic power metal need look no further than Masterplan's Aeronautics. It's not generic power metal, and this alone makes is distinct amongst the European elite.