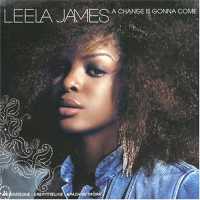 Some people contend that Mariah Carey is the princess of R&B. Well, if that's true then she better give back that glass slipper because the queen of rhythm and blues has just arrived in her platinum chariot poised to kick pretenders off her throne. Ms James arrives on a scene desperately in need of change. A message to all the pretenders, wannabes, hipsters and divas jaunting about worrying about their next fashion endorsement deal or their six-page spread in Playboy. Clean the crap out of your ears and the salt from your eyes, the future is here and she's bringing the fire and funk of Aretha Franklin and Sly And The Family Stone with her.

Leela James has a distinctive voice that shines through like a supernova on each track. Songs like Music, Soul Food, Long Time Coming and the title track are brimming with talent and strength. Produced by some of the top names in music today such as Kanye West and Wycleaf Jean, this is a stunning debut. This is great soul.

Oddly, she does a cover of No Doubt's Don't Speak. Doing a No Doubt song did make me scratch my head. If she was going to cover a song why not choose something from Aretha Franklin, The Commodores or Tina Turner? (I can only imagine Ms James doing a rip-roaring rendition of Proud Mary.) That would probably make this gnarly white boy from the mountains of Virginia pass out in pure rapture.

She recently appeared on the American R&B television show, Soul Train and, according to some, after her performance, the studio received the most telephone and email responses in the history of the show. The change is coming. In fact it's here, and the wind of change is being caused by a hurricane named Leela James.

The ghost of Sam Cooke says, 'Wake up muthaf*cker and buy this record.'